Article written by me for school project on the topic “Effects of Deforestation”.

Deforestation is a very frequently heard word now. But what is deforestation exactly? Even that, many of us do know. However, most of us do not exactly know what are the effects of deforestation. Deforestation might not show an effect immediately, but in the long run, it is very dangerous. As deforestation increases, the amount of oxygen in the atmosphere decreases and we all will start suffocating soon. Trees give shelter to innumerable species and in the absence of trees, there is no forests. 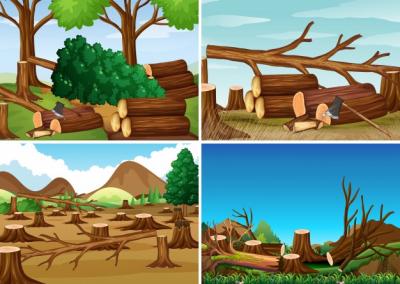 Without forests, the ecological balance will collapse and the earth will turn from the Blue planet to a brown desert planet. There will be water scarcity, incessant rains, landslides etc. The Earth’s residents population will be wiped out. When the cruel, greedy humans learn the value of the forests, it will be too late. Thus, it will be better if we start thinking to stop deforestation or will have to face the consequences like destruction of life on this planet.