Yes, most of us have finished those exams for which we have been whining about all these months: the CBSE Board Exams 2020. I started mine with Computer Applications (Code:402) on February 20, 2020 and finished with Social Science on March 18, 2020, well, quite satisfactorily.

My friends and I were tensed from Day One of 10th standard about these so-called ‘Board Exams’. During those times in class, when I often didn’t understand the topics taught, I would wonder, “How and when will I learn all these things? Will I even pass my Board Exams?!” Such were all our fears and thoughts. 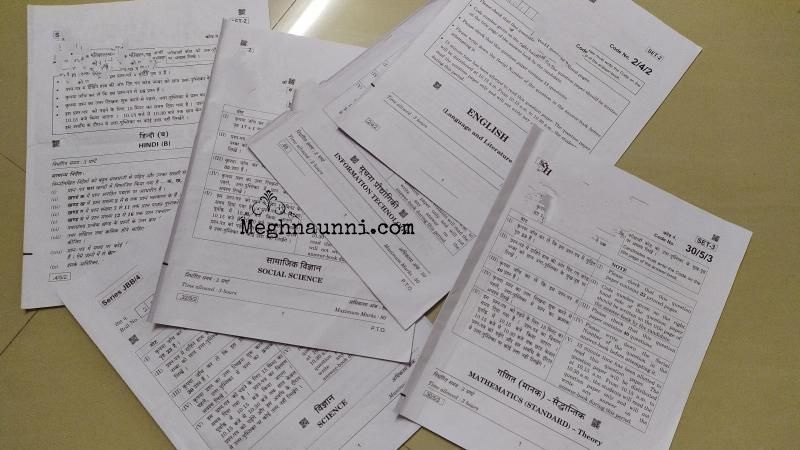 Yep, but somehow we crossed all those barriers and drilled all the facts, formulae, proofs, dates, names, stories into our poor heads, then broke these dams and poured all of them onto our answer books, didn’t we? And here’s my opinion about those mysterious question papers which I encountered during the CBSE Board Exams 2020 :

Not many schools wrote this exam since it was an optional subject. I got Set-4, JBB Series, Code No. 89. It was overall: A Very Easy Paper. Few 1 mark questions were kind of tricky, but since there was an overall choice, I could omit the ones I didn’t know. It was only for 50 marks and we wrote for 2 hours.

Yes, we all thought, “Ah, it’s just English. It will be a piece of cake.” And it was kind of a piece of cake, but I didn’t expect such tricky MCQs in the Comprehension Passage about the Dancing Girl of Mohenjodaro. And I got really confused in the Rearrange the Sentences part: some sentences could be written in more than one order! I just hope what I wrote is correct. The Literature and Writing sections were quite simple and easy. And by the way, I got Set-2, JBB/4 Series, and Code No. 2/4/2.

When I compare all the exams I wrote, Hindi alone disappointed me very much. This paper was TOO lengthy. I was quaking in my boots until I finished my paper. Because of its length, I couldn’t do the writing part too good. My handwriting went from neat to unreadable at the last! But thankfully, all the questions were easy. We had all practised for ‘Fill in the blanks Muhavare’ from the moment we saw them in the CBSE Sample Paper, but at the end, they asked the same old type: make a sentence with this Muhavare, such that its meaning is clearly expressed. I was relieved when I saw mine, I knew almost all of them, in my question paper, Set-2, JBB/5 Series, Code No.4/5/2. But my other friends who got other sets were unlucky- I had never even heard of the Muhavare in their paper. Thank God, I got Set-2.

By now, I had a feeling that I would get only Set-2 in all the exams, because almost all my friends got the same set in all the exams till now. And till now, Set-2 was somewhat easier when compared to other sets. I expected the same luck in Maths too.

Yes, the one which we’ve been counting our days for. I was tensed about Maths from Day One. And finally, on 12th March, I found the paper, to be frank, better than I had expected. Yes, the paper was quite easy, most of the questions were direct. Those who had worked out NCERT textbook and the CBSE Sample Paper properly, would have found the paper easy. And I’m talking about Set-3, JBB/5 Series, and Code No. 30/5/3. But I didn’t know how to solve the Trigonometry Identity proof question. Otherwise, it was far better and easier than I had anticipated. It was really satisfying to see all those questions directly from the NCERT textbook!

Now, this time I had got Set-3, not Set-2. When I saw the set number, my heart skipped a beat, because in the other exams Set-3 was the toughest! And I was eagerly waiting for the easy Set-2! But eventually I found out that, somehow, in Maths, Set-3 was only easier. I couldn’t believe my luck.

Social was the last, but not at all the least. We saw a bit tricky question paper. The one marks really confused me. The 3 marks and 5 marks were quite okay. But the comprehension passages only lengthened the paper for me. I had to waste my time in looking up the answers, rather than writing it down quickly from my memory. Some questions were direct, while others were not. And the map section was also very easy, but they asked to mark a dam, which is actually not there in the syllabus. It was announced that the Water Resources chapter would not be assessed in the Board Exams, but they asked it in the map section. Anyway, there was an overall choice, so we were lucky. I found few MCQ’s and the Assertion-Reason questions quite controversial. Otherwise, it was a fine paper to finish the Board Exams off.

Some papers have been postponed because of the pandemic Covid-19 and the CAA Bill protests going on in India. I really feel sorry for those students who have to spend these vacations studying while others enjoy. And due to these problems, most probably even the results also will be postponed. I really hope this pandemic Corona virus goes away soon, bringing that tension-filled day of results without any delay, so that admissions will not be affected. Let’s all hope for the best!

My Opinion about the 2020 Class 10 CBSE Board Exams
Tagged on: CBSE Assessment Projects    Examinations