As I love fiction and Indian mythology, it is only fitting that I have a favourite female character in them. And I do, a lot of them. Here are my most favourite ones: 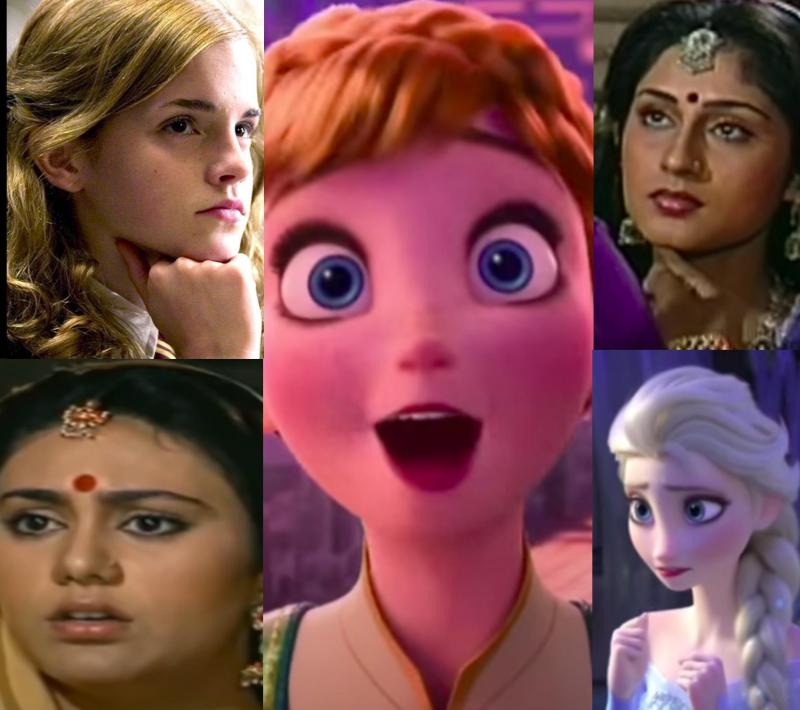 One of the most important characters in the wondrous world of magic. She’s an essential part of the Golden Trio, with her best friends Harry Potter and Ronald Weasley. Many have named her ‘The Cleverest Witch of her age.’

Books are her life. She could probably be one of the most brilliant minds after Dumbledore. She can go on reading book after book, and Harry and Ron often tease her of her visits to the library.  Consider Ron’s opinion: “Like Hermione. When in doubt, go to the library.”

Many consider her an irritable, and annoying ‘Know-It-All’. In her first year, before making friends with Harry and Ron, she was quite bossy and dominative. Friendship made her understand helping and breaking certain rules.

According to me, Harry and Ron, and maybe even the whole Wizarding world would not have survived if it were not for Hermione’s quick thinking and smart actions. In almost every book, she is the one who brings up ideas, thoughts, possibilities, spells, and other things to save everyone. Again, like how Ron said, “We wouldn’t last two days without her.”

In the movies, the role of Hermione is played by Emma Watson. Her acting completed the role itself. Hermione’s sarcastic dialogues, quick thinking and all the other emotions and expressions were brought out excellently by Emma Watson, making her face the ideal Hermione’s face.

Sita, the daughter of Janaka, and the beloved of Shri Rama, is one of the most revered characters in Indian mythology. Even though there was no crime or wrong in her part, she was often criticised and doubted by the gossip-loving citizens of her own kingdom.

She was the one who suffered throughout the major events of the Ramayana. She was abducted by the cunning Ravana, and kept captive in Lanka. She had to be separated from Rama, because of her innocence which led to her abduction. Even in Lanka, she refused to accept Ravana’s offer to her to become the Queen of Lanka. This shows her loyalty towards Rama.

After Rama killed Ravana, even though Rama ordered Sita to undergo a fire-test (agni-pariksha) to prove her purity, Sita did not hesitate, or criticise Rama of anything.

After Rama’s coronation back in Ayodhya, even then Sita was not given peace. The citizens started gossips about her fire-test in Lanka, and started doubting her. Rama couldn’t tell this to Sita, but she found it out herself. She didn’t want to embarass Rama’s position as the King, so she decided to leave the palace and live in the forest alone, even though she was pregnant. She stayed in Sage Valmiki’s ashram, and taught her sons good values and raised them alone, without letting them know that they were the sons of Rama.

Later, when Sita is summoned to Rama’s court, the people demand another fire-test. Sita decide that her sons, Lava and Kusha are old enough, and leaving them in their father Rama’s care, she calls upon Mother Earth to take her away from this world of never-ending accusations and doubts. She tells that a place where a woman is continuously accused for no fault of hers, is not where she is meant to be. And thus, she descends into the Earth along with her mother, Bhumi-devi.

Sita is known for her self-sacrifice, true love and loyalty towards Rama, courage and her purity. She will be one of my favourite characters from the Ramayana, for being such a good example for a bold woman.

Queen Elsa of Arendelle is also one of my favourite heroines. Elsa is a very beautiful princess, or to be more precise, queen. I love every outfit of hers, and her platinum blonde hair. She looks very calm and composed, but on the inside she was always fearful of what her magic might do next. Especially during her childhood until she learned how to control her powers, she was not friendly or sociable, because she didn’t want to hurt anyone with her powers, most importantly, her little sister Anna.

Then once she fled from Arendelle to the North Mountain, she felt that she didn’t have to be so afraid of her powers. She tried testing her powers, which she had tried to hide, and found that her powers could not be just dangerous, but very beautiful too. Hence she creates her own ice palace, a new outfit and a free braided hairstyle (rather than a tight bun) and lives alone in her palace, well away from Arendelle.

Later when Anna comes in search of her, she accidentally strikes Anna in the heart. But this was Elsa in her early-twenties. She had no complete control over her powers. Her emotions decided her level of powers. Fear always made her do dangerous acts with her powers, but when she was happy, she could display beautiful icy magic. She realised that ‘Love will thaw’ and used love to unfreeze the winter.

And now, Elsa has learned how to control her powers really well, she now uses it to save people from danger, and protect, rather different from her younger, frightful self. She realised that she was the fifth elemental spirit, and that she was not really meant to be Arendelle’s queen even though she was the eldest. So she willingly abdicates the throne to her sister Anna and lives in the Enchnated Forest now, living in happiness with the other four spirits. This confirms that Elsa does not desire power or royalty, but peace and happiness.

I also love all of Elsa’s songs. They are excellently sung by Idina Menzel and not to mention her self-realisation song, ‘Show Yourself’. This particular Disney character has taught us how control our fears and doubts, and do what we feel free to do, and thus live in peace.

DRAUPADI from the Mahabharata:

Draupadi, or Panchaali, is also one of the protagonists of the vast epic Mahabharata. She is the real cause of the ending Kurukshetra war. Born out of the fire, she was always sharp-tongued. She was a devoted wife, but had to undergo a terrible ordeal of being the common wife of five brothers. She was a very close friend of Lord Krishna. She was sometimes a stubborn lady, and sometimes forgiving too. She is easily annoyed, for she has a trace of fire in her. She was a very smart lady; in some retellings, she warns Yudishtira, not to respond to Duryodhana’s invite for the destructive dice-game.

She had to face many more unfriendly and embarrassing comments from many people, since she was the wife of five men. But nothing was more shameful than the incident at the Kuru Court in Hastinapur, where Dushhasana attempted to publicly disrobe Draupadi, only to be saved by Lord Krishna. She vowed that she would not tie her insulted hair, until she got Dushhasana’s blood to wash it with. She was reprimanded by many for such a terrible vow, which only meant war. For the rest of her life in the forest, she slowly sought her vengeance by reminding her husbands of her long-sought revenge for her insults.

Hence she was one of the main warriors of the Kurukshetra War, fighting her personal war of vengeance through her powerful husbands.

I like her because of her devotion, open-mindedness, intelligence and boldness.

The best portrayal of Draupadi I have ever seen is by Roopa Ganguly in B.R.Chopra’s Mahabharat TV serial. Her dialogues were husky and fierce which showed the fire glowing deep inside her. The most popular episode in this serial itself is the vastraharan or cheer-haran scene, thanks to Roopa Ganguly’s wonderful acting as Draupadi.

Anna is the protagonist of the movie Frozen and deuteragonist of its sequel, Frozen 2. She’s the younger sister of Elsa, and currently the Queen of Arendelle. Initially, Anna was a very hyper-active, super-excited and awkwardly-talkative princess, but now she has matured and become more calm, now that she is not alone. She has Elsa, Olaf, Kristoff and Sven for company, and the open gates of Arendelle for freedom. She is someone who always sees positivity in everything, or we could say, she always sees the glass as half-full. She is always ready for adventure, and is fearless. In the sequel, she is found to be overly-protective of her sister Elsa. This is maybe because she didn’t want to lose Elsa again.

The main thing I like in Anna is that, during sad times, or when discovering terrible truths, Anna tries to console her dearest one, rather than crying herself. She makes sure that the other one does not continue to be sad or gloomy with her nearby.

She is bound to get easily angered or annoyed, and initially, she does most things without thinking about its consequences, like accepting Hans’s marriage proposal, or provoking Marshmallow to attack them by throwing a snowball at him. And she surprisingly has lot of body-power, more than any girl of her age. This can be most clearly seen when Anna uses only her fists to punch Hans in the face, and he topples overboard and falls into the water.

She also thinks quickly (sometimes too quickly) and uses her brain admirably in the chase scenes, like saving Kristoff from the wolves. And not to mention her unconditional love for Elsa. Elsa was not even friendly to her, but Anna was ready to sacrifice her life for her sister’s. This eventually saved her own life.

She also shows extremely good leadership qualities in Frozen 2, as she leads the Earth Giants into destroying the dam, hence freeing the forest. She did what was good for Arendelle, and the forest as well, and hence rightly deserves to be the Queen.

She cried a lot when she thought Elsa and Olaf died, but gradually overcame it, and did what Elsa wanted her to do: break the dam. She was brave and once again put her life in danger for Arendelle and indirectly saved Elsa.

Such qualities are not seen in many Disney princesses, and hence I like Anna the most, along with Elsa. And I love it when she looks at Olaf: it’s an awesome expression of cuteness. Anna is voiced by Kristen Bell, and I love her song ‘For the First Time in Forever’ very much.

2 thoughts on “MY FAVOURITE FICTIONAL AND MYTHOLOGICAL HEROINES”