Abhimanyu is one of the most tragic heroes in the Mahabharata. He is considered the youngest and bravest warrior of the Pandava army.

In fact, Abhimanyu is Varchas, an incarnation of the son of Chandra, the Moon God. Chandra couldn’t bear to be separated from his son for so long, and hence it was already prophecised that the incarnation would be a very short one.

Varchas was born as Abhimanyu, as the son of Arjuna and Subhadra. Arjuna was the third Pandava, and Subhadra was the sister of Lord Krishna. Abhimanyu was the most loved amongst all the sons of the Pandavas. He was so dear to them that even Draupadi loved him more than her own sons. 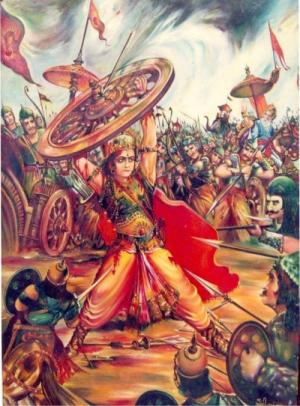 Abhimanyu was the son who inherited Arjuna’s amazing archery skills. He was only about three years old when the Pandavas and Draupadi went to the forest in exile. During that time, Subhadra and her son lived in Dwaraka, Lord Krishna’s kingdom.

Abhimanyu was very naughty, but at the same time, eager to learn new things and excel in them, just like his father. He was keen on using the bow and arrow. Lord Krishna, his maternal uncle, trained him in the use of all weapons, astras and arms. He became an excellent warrior at a very young age.

Lord Krishna kept telling Subhadra that Abhimanyu was meant for great things. He would become a very great warrior, that a whole day will be dedicated in war for his appreciation. But Krishna never mentioned anything about his lifespan, nor did anyone fear about it.

When the Pandavas’ exile was over, Abhimanyu was only 16 years old. He

was married to the princess of the Matsya kingdom, Uttara. Shortly after this happy union, the war started. When Abhimanyu left for the war, Uttara was already pregnant with his child.

Abhimanyu was not familiar or introduced to his elders in the Kuru family, because the war was decided soon before all this could be done. His introduction was done directly in the war. He fought valiantly in the war and surprised all his elders.

He broke Bhishma’s bow and was close to defeat him. Bhishma could have killed him that instant, but something prevented him from doing so. Hence he blessed Abhimanyu for every wound he inflicted upon him. Even Arjuna’s guru, Dronacharya could not defeat him. Everyone could see Arjuna’s bravery and skill in this young, handsome son of his.

On the 13th unlucky day of the war, Susharma and his warriors challenged Arjuna to fight them, and slowly pulled him away from the main battlefield. In the meantime, Dronacharya arranged his soldiers in the form of a wheel, also known as Chakravyuha. Among all the thousands of warriors in the Pandava army, only Arjuna and Krishna knew how to break that formation. And both of them were not anywhere nearby. And this is when Abhimanyu steps forward.

Years ago, when Abhimanyu was in Subhadra’s womb, Arjuna explained to her the method to break the Chakravyuha. But halfway through, Subhadra fell asleep, and Abhimanyu couldn’t learn the whole method.

Hence, the young lad of 16 years knew only how to enter the trap, but not how to come out. With his uncles’ permission, he entered the Chakravyuha, with the belief that his uncles would follow him into the trap to aid. But the king of Sindhu, Jaidrath blocked them, thus preventing them from aiding Abhimanyu.

Abhimanyu proceeded alone, killing tens of thousands of soldiers and many main warriors of the Kaurava army. He killed many heroes such as Duryodhana’s sons, Karna’s sons and brothers, and many other kings who aided the Kauravas. He was the most dangerous enemy of the Kauravas that day. Even Dronacharya, Kripacharya, Shalya, Duryodhana, Karna, Dusshasana, Ashwatthama were badly wounded and defeated by Abhimanyu. Duryodhana and Karna were so angered by Abhimanyu, and Duryodhana ordered all the Maharathis of his army to attack Abhimanyu all at once. This was against the rules of war. Warriors were supposed to do only duels, that is one-to-one fight. Not even two people were supposed to attack one person.

But the Kaurava army violated this main law of the war, which was made by their own Commander-in-chief Bhishma. They started firing arrow after arrow together at Abhimanyu. He tried his best to defend himself. Karna killed his charioteer, and blasted his chariot, throwing Abhimanyu onto the ground.

The Kuru warriors advanced on him, swords withdrawn. Abhimanyu pulled out the wheel of his broken chariot and held it up to defend himself. He was already very severely wounded from the shower of arrows. But the Kauravas didn’t not mind any of his wounds.

Seven Maharathis attacked Abhimanyu with their swords at the same time. They stabbed, slashed and pierced him, violating every single law of war. Thus, Abhimanyu spoke his last words expressing his misfortune to have died at the hands of such cowards. Shouting his father’s name, Abhimanyu breathed his last. The cowardly warriors who murdered him then danced around him in a disgusting war-dance.

At the very same moment, Subhadra at Dwaraka started crying suddenly, without even knowing the reason. Arjuna, who was fighting Susharma miles away from the scene, also felt disheartened and sad, even though he didn’t know anything that had happened.

After learning what happened to his brave son, Arjuna vowed to kill Jaidrath who had stopped the Pandavas from aiding Abhimanyu. The very next day, Arjuna killed Jaidrath in war, with help from Krishna.

Hence, Abhimanyu lived a very short life and was one of the most tragic heroes in the epic Mahabharata.