After the disastrous events at the Kuru court, after the attempt of disrobing Draupadi, the Pandavas and their wife were exiled in the forest for twelve years, and one year incognito.

Surya, the Sun-God, had presented Draupadi with a magical plate, known as Akshaya-pathra, which was always filled with food, until Draupadi had her meal. This helped the Pandavas escape from embarassment from not having anything to offer to eat to the numerous rishis and priests who often visited them in the forest.

One day, Sage Durvasa was visiting Duryodhana at Hastinapur. Duryodhana fed him and his disciples grandly, and cunningly asked him to visit his ‘dear cousins and sister-in-law’ in the forest and give them their blessings. He had thought that the Pandavas would have to face Sage Durvasa’s curse because they would not have anything to offer him.

Duryodhana was partially right, because, by the time Durvasa reached their hut in the forest, the Pandavas had finished their meal, and even Draupadi had had her share. So, the Akshaya-pathra was now empty.

Sage Durvasa and his disciples reached the Pandavas’ hut and informed Yudhishtir that they would be joining them for lunch, after they finish their bath in the nearby river. Bhima went and told Draupadi to make something for the sage and his disciples quickly, and left to make arrangements for the sage’s meeting. 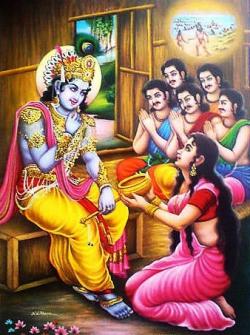 But, the magical-plate was empty! It would not produce food now, until it was time for dinner. And there were no leftovers too, except for a grain of rice on the rim of a bowl. Draupadi was distressed. Sage Durvasa was known for extremely quick temper, and his curses were also popular. Struck in a dilemma, she thought, “Oh Krishna! Why do we have to continuously face such embarrassing situations? What will I do now?”

“You must have something left.”

Draupadi turned to see who it was.

It was Krishna himself! When did he get here? She had just thought of him!

“Come on, get me something to eat. I’m starving!” said Krishna, in his most mischievous tone.

“So thoughtful of you to visit us, exactly when there’s nothing here left to eat. I’m overjoyed to know you’re hungry too!” snapped Draupadi, who was more distressed, now that she had one more person to feed.

She looked at him, and he smiled back, looking more mischievous than ever. Draupadi raised her eyebrows.

“You have lied to me.” said Krishna.

“Me? When?” asked Draupadi.

“You said there was nothing to eat here, but I see a grain of rice on that bowl’s lid.”

Draupadi heaved a sigh of exasperation, and went to retrieve that grain of rice. She offered it to Krishna. Tears in her eyes, she said, “I’m sorry Krishna. I didn’t mean it, but I really don’t have anything to fill your hungry stomach but this. Please accept this. Allow me to prepare myself for Durvasa’s wrath.”

Krishna chuckled. “I don’t really understand what you’re telling Krishnaa, but for me, this grain of rice is more than enough.” He swallowed the tiny grain, and acted nice satisfaction. He even burped, to which Draupadi giggled, even though she was dismayed inside.

At that moment, Bhima entered the hut, his face bright. “Sage Durvasa has left! It seems he and his disciples are no longer hungry. You need not worry, Panchaali!”

Relief rushed towards Draupadi. She was definitely lucky today. She turned to look at Krishna who had been sitting on the cot.

The cot was empty.

Draupadi swung her head sideways. The whole hut was empty, except for her and Bhima, who was arranging the firewood he had collected. “Where did he go?” she asked in surprise.

“Krishna? He’s at Dwaraka probably, where else would he go?”

“Didn’t you see him sitting on that cot a moment before?” asked Draupadi.

“What happened to you, Panchaali?Krishna visited us only a week ago, don’t you remember? He hasn’t come here since.”

One thought on “Akshayapatra & Krishna’s Grain of Rice: Another time when Krishna saves Draupadi”