The Story of Shanta- Lord Rama’s Sister. Ad the story of how the Putrakameshti Yagna (through which Lord Rama was born) was conducted with the help of Shanta. 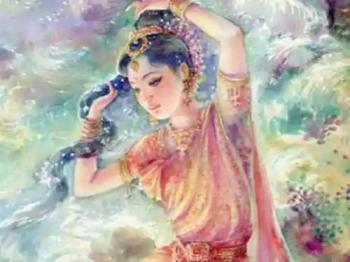 Shanta was the daughter of King Dasarata and his Queen Kaushalya. She was given in adoption to King Romapada and his wife Vershini, who was Kaushalya’s sister. Shanta was a beautiful and wise young woman.

One day a Brahmin visited Romapada and asked him to help with his cultivation during monsoon. But Romapada did not pay much attention to the Brahmin’s request, so the Brahmin left annoyed. Lord Indra became angry at this and the kingdom did not receive any rainfall for many years.

Dasaratha was also distressed for he did not have a son as Ayodhya’s heir to the throne. A sage advised Romapada that a yagnya can bring rains and also through Putrakameshti yagna, Dasaratha could beget a son. But the yagna has to be done by a Rishi who had been extremely chastic all his life, and that was none other than Rishyashringa.

Shanta was given in marriage to Rishyasringa and he conducted a yagna which brought back rains to Romapada’s kingdom. He also conducted the Putrakameshti yagna for Dasaratha, through which Lord Rama and his brothers Bharatha, Lakshmana and Shatrughna were born.

One thought on “The Story of Shanta- Lord Rama’s Sister”