Less known Facts about the Goddess Ushas Or Usha – the Dawn.

Ushas is the Goddess of Dawn. Goddess Usha is an important deity from the Rig Veda. She is described as a beautifully adorned young woman, who tirelessly appears in the sky 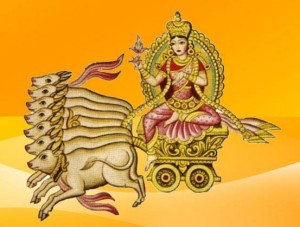 every day without any break. Goddess Usha creates the dawn and hence the day. She is the consort of the Sun God, Surya.

She leads  Him across the sky, revealing His majestic spelndour and light to the world at the break of the dawn. Ratri, the Goddess of the Night is the sister of Goddess Ushas. The Ashvini Kumars are Her sons.

Ushas rides a golden chariot, drawn by golden red horses or cows across the sky and brings light in the sky. She is the one who  starts the day and prompts all the living creatures to wake up and start doing their daily chores. She is the Dawn, whom we wake up to every morning.

Facts about the Goddess Ushas Or Usha – the Dawn
Tagged on: Story Writing