✨NATANAMAADINAR✨ ( Original artwork. Kindly do not repost without permission.)

Wanted to paint Lord Shiva for a very long time, and the Sivamayam+Shivaratri combo made me do it.
.
This painting of dancing Lord Nataraja is inspired by many stories, songs and people:
1. Firstly, the anatomy for this pose is modelled on one of Harinie Jeevitha Akka’s poses from Sivanandalahari.😇

2. The fact that Lord Shiva is lifting His right foot and not His usual left foot here is inspired by the legend mentioned in Thiruvilayadalpuranam. In most temples, the bronze idols of Lord Nataraja are shown with the left foot raised with the exception of the idol at the ‘Velliyamabalam’ or Rajata Sabha in the Madurai Meenakshi Temple. In Madurai, He dances with His raised right foot and not the left. The hall where He danced is called “Kaal maari aadiya patalam.”  The pose in my painting here is in a way inspired by this story.🌌

**** STORY : The legend of “Kaal maari aadiya patalam” is mentioned in the Thiruvilayadalpuranam, which narrates celestial acts of Lord Shiva. Rajasekara Pandya who ruled Madurai mastered all 63 of 64 skills, but was reluctant to learn to dance, because he did not want to disrespect Lord Nataraja by trying to dance equal to him. After knowing his Chola counterpart learnt dance, King Rajasekara also learnt dance, but found it very painful. The king was very much concerned about the Lord’s balancing act while dancing permanently on the grounded right foot that might cause Him pain. He prayed to Nataraja to shift his stance and change His posture. Because of his prayers, it is believed that the Lord himself made the shift from left foot to right foot at Velliyamabalam.

3. The way Ganga falls from from the Lord’s head in this painting is inspired by the line from ‘Natanamaadinaar’- “Gangai thuli sidhara..”💧

4. As for the Jatā mudi, it is inspired by the original Natarajar idol, where His matted hair spreads out in a similar way as He dances.🌬️

5. I also tried to incorporate the significance of Lord Shiva’s cosmic dance as He balances both creation and destruction through His Tandavam. The Damaru symbolises creation and the aureole of flames around Him symbolises destruction.🔥

6. And of course, the complete Muyalakan ( or Apasmara-the personification of Ignorance) outfit is inspired by the usual costume and make-up of Muyalakan in SDN’S Sivamayam.🌍

7. I also like how (coincidentally though) the Lord’s hands look like as though they’re the strings of the Damaru in the background!😃

8. Finally, this whole concept was inspired by Sivamayam (obviously). This was supposed to be done and posted on Shivaratri, but things took a different turn and I couldn’t finish it. So here I am. Belated Happy Shivaratri!💥
.
Done using Camlin Acrylic paint on Watercolour Sheet ❤️ 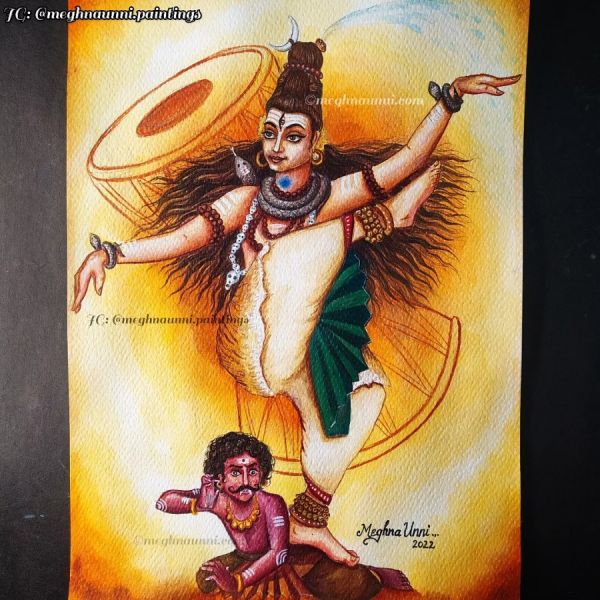