✨1. JWALA NARASIMHA✨
Nava Narasimhas of Ahobilam Painting Series🙏🏻
.
I’m starting a new painting series based on the ‘Nava Narasimha’ dance drama performed by the students of Sridevi Nrithyalaya, choreographed by our Guru, Dr. Smt. Sheela Unnikrishnan, which debuted on July 2nd 2022, a week back.😇 In this series, I’ll be painting 9 forms of Narasimha Swamy found at Ahobilam, the centre of worship for the 4th Avatar of Lord Vishnu. 🦁 I’m starting the series with Jwala Narasimha, possibly the fiercest form of all the 9 Narasimhas at Ahobilam.
.
I have referenced the actual idol of Jwala Narasimha at Ahobilam for this painting.
.
Jwala Narasimha is also named Ashtabhuja Narasimha, the one with 8 arms. Two arms tear open the entrails of Hiranyakashipu, two arms hold his head and legs on the Lord’s lap, another two arms hold the Conch (Shankha) and Discus (Chakra) and the last set of arms take out the intestine of the demon and wear it as a garland. The Lord is seated on the Garuda Peetha, with the right leg hanging down and left leg folded. Hiranyakashipu is shown with a shield on his left hand and probably also a sword on his right, but which isn’t visible in the sculpture. Young Prahlada is also shown near the foot of the Lord.
.
The temple of Jwala Narasimha Swamy lies on a hill called ‘Achalachaya Meru’. This place is said to be the actual spot where the Lord’s anger reached its culmination when he tore Hiranyakasipu.⛰️
.
It is believed that the entire area of Ahobilam was actually Hiranyakashipu’s palace and it was at the spot where the temple stands that Lord Narasimha actually killed the demon. Jwala means flame and this is where Lord Narasimha was at the peak of his anger.🔥
.
This painting took me almost 5 days to complete and I’m still researching on the other 8 Narasimhas! 😀 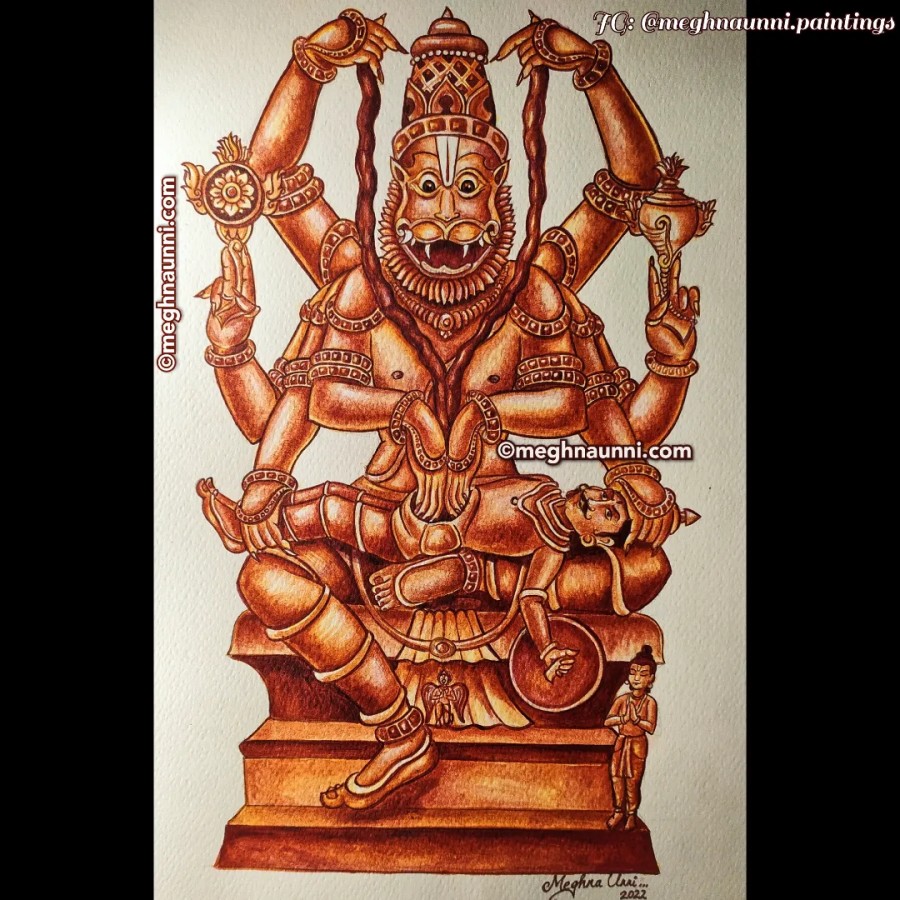