Karanja Narasimha or Sāranga Narasimha is the fifth Narasimha Kshetram at Ahobilam. There is an interesting story behind the iconography of this form of Narasimha. Once, Lord Hanuman was meditating upon Lord Rama at Ahobilam. Narasimha Swamy appeared before him, but Hanuman couldn’t recognise Him. Upon being asked who He was, Narasimha replied, “I am Rama. You had called me, so here I am!” Hanuman was confused and said, “How can you be Lord Rama? You do not have the form of Lord Rama.” Hearing this, Lord Narasimha took the form of Karanja or Sāranga Narasimha, holding the bow like Lord Rama on His left hand and the Sudarshana Chakra on His right. Seeing this divine form, Lord Hanuman was convinced and from that day, started worshipping Narasimha Swamy as well. There is a small shrine for Hanuman in this Kshetram too.

This form of the Lord is seated under a Karanja tree (hence the name ‘Karanja Narasimha’) in the dhyānam pose. He has a third eye on His forehead and holds a bow and discus (chakram) on His upper two arms. Hanuman isn’t shown in the original idol, but I wanted to add him to my interpretation too. 😇 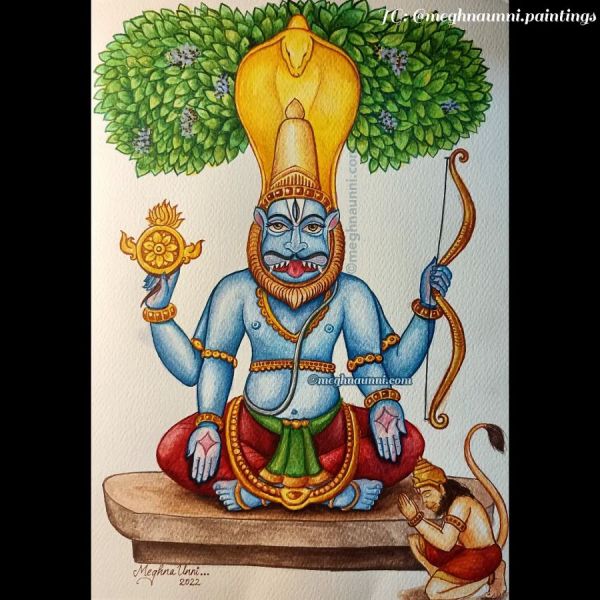