I would like to add a short story I have written last year as a school assignment in 9th std. We were given a topic to write the story which went on like – Write a story with the beginning ” The loyalty of dogs is unmatched and deeply moving”. So here goes my story:

The loyalty of dogs is unmatched and deeply moving. I learnt this lesson from my dog, Padfoot. He was a lovely little Golden Retriever. When he was a pup, I used to adorn him with a cute punk ribbon round his neck and a pink bow on his head. He looked much like a female in this attire.

The moment I would set foot on the walkway towards my home, after school, Padfoot would come galloping in my direction and scurry round and round my legs in a playful manner. Then I would bend down and pat him on the back, and as though it was a daily reward for him, he would trot to his kennel and settle down.

In the evenings, I would take him on a short walk just round the nearby square. The street vendors amused him a lot, he would jump up and down at the sight of Bhuvan uncle with his cut pineapples and watermelons.

He made wonderful catches with his everyday throw of dog pellets. I found it really relaxing to play with him every evening, he made me really cool-minded. He would often lick our faces, which was sticky, but it showed his utmost affection for us.

Once,when I was about to go on my first trip out of Chennai alone, he made a real big mess. He didn’t want me to go. I talked a lot to him on that night, and somehow consoled him. When I returned, my mom told he didn’t eat his food properly, was always sulking in a corner and looked very sad. I was touched.

Even now, Padfoot sulks in his room. This is because he is not at my home now, but at the blue-cross shelter near my home. He had grown big and started barking a lot, so that the neighbours started complaining. So my parents forced me to send him to blue cross and after a lot of arguments and fights, I sadly said good bye to Padfoot, who responded the same way. I visit him every weekend and it always turns out to be the best day of the week for both of us. 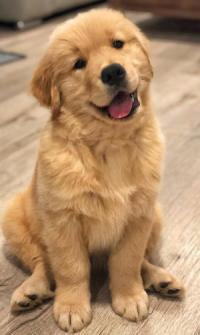