Global Warming, otherwise the “warming of the Earth’s surface due to accumulation of certain harmful gases in the atmosphere” has seriously affected our lives on the Earth. It causes climate change, which is becoming more destructive than we can imagine.

What’s so destructive about it?

Let’s see. The chemicals released from vehicle exhausts, factories and industries and many other gases increase the temperature of the Earth’s atmosphere.

Due to this high temperature, the glaciers and ice of Antarctica are melting at a very dangerous rate. You might ask what is so dangerous about it. Well, there isn’t anything much. The only thing is, if it goes on melting like this, there won’t be any coastal cities left on the Earth; they’ll all be submerged underwater because of the rising sea level. 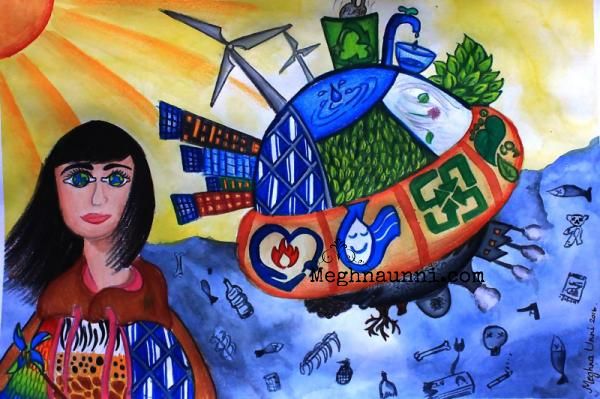 CFCs released from air conditioners and refrigerators after they are disposed harm the protective Ozone layer in the atmosphere and thanks to them, we’ve got very nice big holes in it, allowing dangerous UV rays reaching us.

Climate Change causes high, flood causing rainfall in some regions, while some areas experience drought like situation with no rains for longer duration, some other places experience severe snow. Global warming is disturbing weather pattern all around our globe.

Last summer, Europe experienced high temperatures causing harm to many people and other living things. Like-wise, many of the Indian states experienced heat-waves which killed and injured so many people, especially farmers and labourers who work under the sun. In the monsoon season, which is still going on, many Indian states had flood situations due to incessant rains which happen with in one or two days. High rains caused landslides, floods in Kerala, Mumbai, Pune, Sangli, Kolhapur and other areas of Maharashtra,  Karnataka and northern states recently. Floods caused big damage to lives, crops, property in these states. Kerala experienced floods 2 years in a row, in 2018 and 2019.

We all together should work hard to reduce the effects of global warming, otherwise our planet is in grave danger. Plant more trees, reduce pollution, strict laws restricting dumping of waste in water bodies, restoration of natural water bodies, reduce use of plastics, encourage waste segregation. Governments must ensure to reduce pollution caused by factories and other industries by strict laws. Schools must take up initiatives to plant more saplings and create awareness among their students about the dangers of global warming. We need to fight against global warming as unified community.