Frozen Fever is an animated short film by Disney, featuring the characters from the movie Frozen (2013), released in 2015 along with Disney’s Cinderella.

It is a short-film, and the story is based on Anna’s 19th birthday. Because of Elsa’s icy secret, the castle doors had been closed and the sisters had been separated, until Elsa’s coronation. Hence, Anna had never had a real birthday before. Her birthday falls on the day of the Summer Solstice, the longest day in the year.

Elsa is determined to make her little sister’s birthday perfect in all manners. She plans and works for weeks before the day, along with the help of Kristoff, Sven, Olaf, and the royal servants, and try their best to keep it a secret from Anna. A huge, chocolate ice cream cake is made, and Elsa keeps it cold using her powers till the evening. She also creates an ice-statue of both Anna and her. The film begins with this scene. 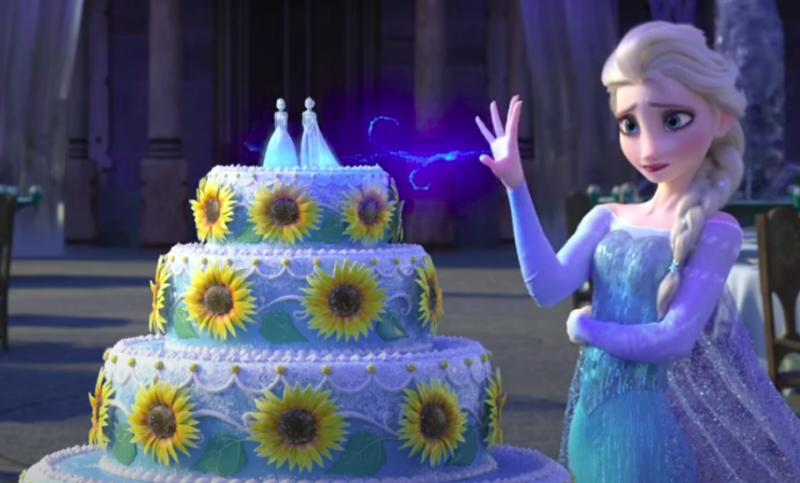 They plan for the party in the palace courtyard, where Elsa entrusts Kristoff to keep the arrangements and decorations as it is, without damage until evening. Olaf is keen on eating the cake, and is caught by Elsa, who tells it’s for Anna. She adds few more icy decorations in the courtyard, and leaving Kristoff in-charge, she leaves to wake Anna, the birthday girl.

Anna didn’t know what a real birthday was, since she never had one. She didn’t know it was all about party, celebration, singing, gifts and most of all, cake. Woken up by an excited Elsa, she is presented her new birthday dress. Elsa adds few more flowery decorations to Anna’s dress, and magically transforms her own icy, blue gown to a green one with pink flowers, in honor of the special day.

Elsa had been working hard for weeks, creating a birthday treasure hunt for Anna. She laid out string, which led to the places where the gifts had been hidden. In the film, Elsa sings “Making Today a Perfect Day” the birthday song for Anna, all along their treasure hunt.

But something is bound to go wrong right? Yes, it’s Elsa’s icy powers, yet again. After more than a week’s work, a tired Elsa catches a cold exactly on the special day. When she gets ready for the hunt in the morning, she starts sneezing. And unbeknownst to the two sisters, several tiny snowmen appear when Elsa sneezes, and run away out of sight, heading for the courtyard. As she sneezes throughout the day, about a hundred of them are created, and Olaf is delighted to see his cute, little brothers.

All of them are intent on getting the cake, and poor Kristoff has to battle with them for a long time to save it for Anna.

After discovering the gifts in the palace, the sister duo head for the village, as the string goes on and on. Anna has got sandwiches, a bracelet, an Olaf-cuckoo clock, a sunflower-bouquet, her painted-family portrait, and some more gifts.

Meanwhile, the snowgie-battle in the courtyard is still going on. The snowgies (the name for the tiny snowmen) manage to destroy the banner on which was painted ‘HAPPY BIRTHDAY ANNA’, much to Kristoff’s dismay. Olaf offers to fix it, but unfortunately, he can’t read, write or spell, so the fixed banner reads ‘DRY BANANA HIPPY HAT’ instead! Kristoff, Sven and Olaf toss Elsa’s precious cake from one to another to save it from the jumping snowgies. 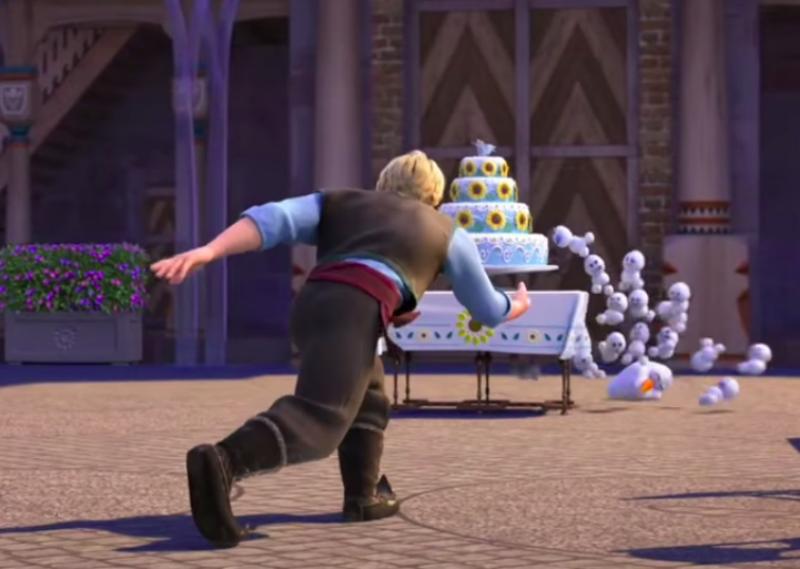 Kristoff saves the cake from the Snowgies using Olaf’s head

Meanwhile, it’s almost dusk, and Anna’s gifts are a lot more in number now. Elsa’s cold has worsened: her gait is unsteady, her face is flushed, and she hardly knows what she’s actually singing. Anna is growing more concerned about her sister, but Elsa refuses to stop the hunt and spoil the day. She insists that the cold never bothered her anyway.

Finally, they reach Arendelle’s clock tower, whose top is where the birthday string ends. Anna is not sure whether Elsa is up to climbing the whole tower, but Elsa, now almost looking and talking like she’s drunk, calls out, “I’m fine!” and leads Anna to the top of the tower. 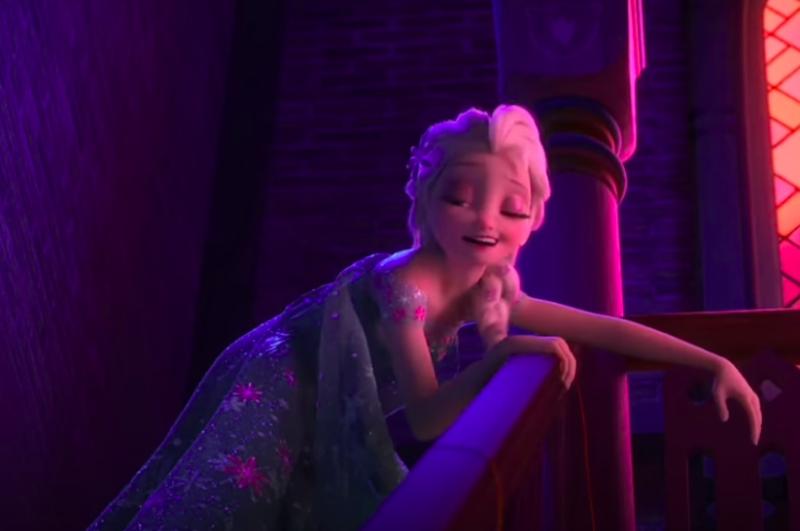 There are two dolls of Anna and Elsa, which was meant to be the gift. But Anna looks at her sick sister, dancing and singing, for her little sister. As Elsa’s condition worsens, she loses her balance, and almost falls down from the tall tower. But Anna comes to her rescue, pulls her back, and convinces her that she is very sick, and has to rest. 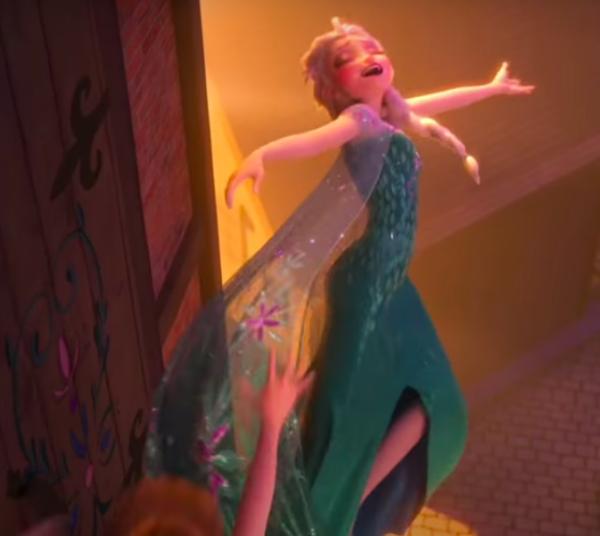 “Elsa almost falls off the tower”

Elsa admits it, and leans on Anna as they get back to the castle. Anna is worried for her sister, but Elsa is guilty and sad that she yet again spoiled her sister’s birthday. Anna consoles her and open the castle doors which open towards the courtyard, where the snowgie-Kristoff battle is still going on. The rest of Arendelle is also present for the party. 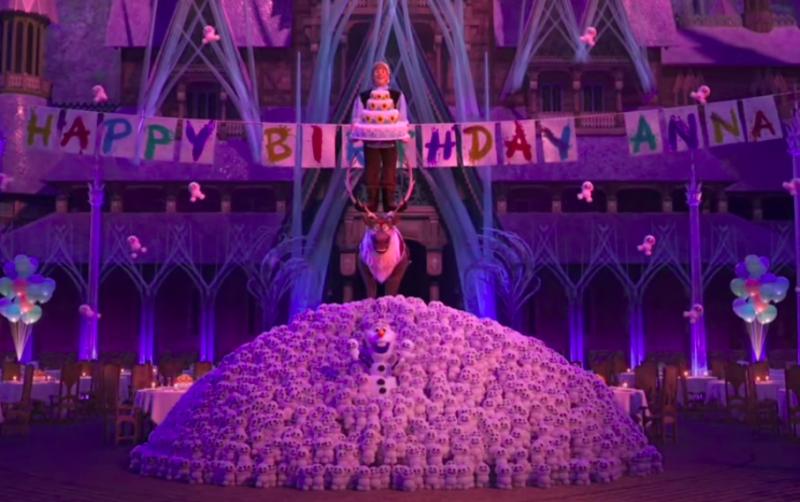 Anna is happily shocked at such a big surprise, and poor Elsa wonders what caused so much chaos. Then she sneezes yet again, and finally discovers what did cause so much trouble for Kristoff and Sven- the little snowgies, keen on devouring Anna’s cake, just like their brother Olaf. The cake is cut, the snowgies get their share, Kristoff shouts out his love for Anna in the form of a birthday wish, and everyone celebrates.

But Anna is still worried about her sick sister, and insists that she takes her to bed. But Elsa tells there’s one more thing left: the queen’s official birthday horn. She wanted to end Anna’s birthday with a special blast. She accidentally sneezes into the horn, a massive snowball is released, and it travels far till the Southern Isles, and falls on Hans, who’s in exile. He is pushed into a cart of horse manure!

Back in Arendelle, Anna feeds her sister hot soup, telling her that this was her best birthday present: taking care of her sister.

In the last scene, Kristoff, Sven and Olaf bring the hundreds of snowgies to Elsa’s ice palace, for them to stay. The castle’s protector, Marshmallow confusedly looks at Kristoff, who sighs, “Don’t ask.” Happy Olaf has named each and every one of them too!

This Frozen animated short is funny, adorable, fast-paced and happy to see. it’s only 7 minutes long, but has so many events. Olaf’s ‘DRY BANANA HIPPY HAT’ is the best scene, not to mention the last surprise party. The snowgies are extremely cute, but nasty little buggers too. Sister love is clearly explained through this film series. Elsa and Anna’s new dresses are awesome, and so is the song ‘Making Today a Perfect Day’, sang by the original Frozen voice actors Kristen Bell (Anna), Idina Menzel (Elsa), Josh Gad (Olaf) and Jonathan Groff (Kristoff).

A very short film, but has all the excitement and perfectness of every other Frozen film.