I’ve been playing Hill Climb Racing for some time on my Dad’s tablet. It’s a nice game to play, even if you don’t like cars or racing or similar stuff. Even I wasn’t interested in such things nor am I now, but this game can be played by anybody, car lovers or haters. It’s developed by Fingersoft. It’s based on common and basic physics, not that you need to know some real complex physics theories (even though it will help if you do). Knowing about gravity, speed and brake will be enough. 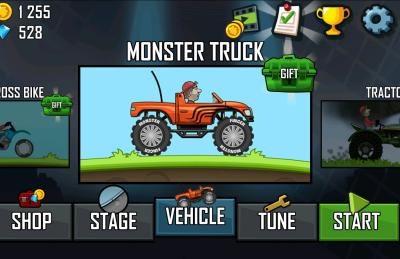 So, there’s this driver called Bill (I think it’s Bill, as I’m not sure), and you have to control the car, with him as the driver. There are many terrains, or stages , as they call it in the game, like highway, arctic, cave, desert, mountain, moon, mars, and lots more. Each stage has a different feature. For example, the desert stage has lots of bumps and gutter-y areas, the cave has only little height, so you’ve to be careful, the arctic is a bit slippery, the moon stage has little or no gravity, so you’ve to concentrate on flying rather than driving on ground.

And of course there are different vehicles, like Hill Climber (a red car), M 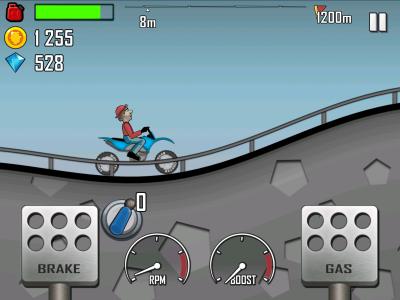 Even the driver himself looks weird. He looks as though he’s sleeping, but 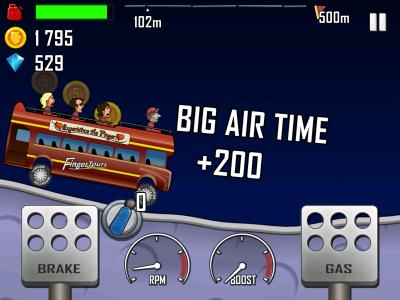 he’s not. And when you accidentally crash the car, you should see the graphics! Bill sometimes breaks his neck, twists his body and arms in weird angles, making it look horrific, if it was in real life. But all the time, it’s funny, so no offense.

And, so, when you drive your selected vehicle in a selected stage, you collect 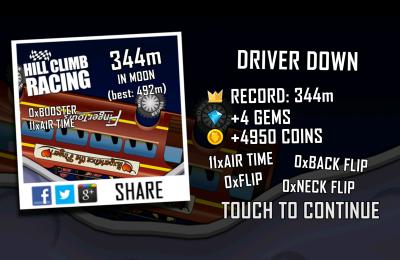 coins and gems. You have to collect, save and use these coins to buy your next vehicle and new stage. The most advanced ones are really costly, obviously, so you have to save a lot of coins. Of course, you can buy coins and gems using real money too. 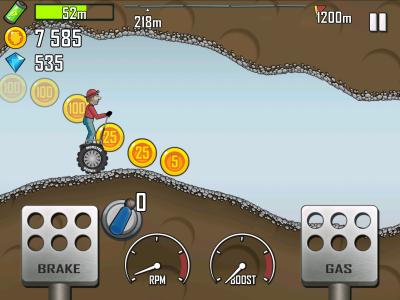 When you drive, you earn coins in another manner too. There is no calculation of points or anything, so it’s simple. When your vehicle elevates or you know, literally flies in the air after a height, when you land on the ground you earn coins for that, known as Air Time. Then if manage to do flips and back flips with your car, you earn coins for the saem. You even get coins if you die with a neck flip!

Then there are different levels for each stage. For example, if you cross 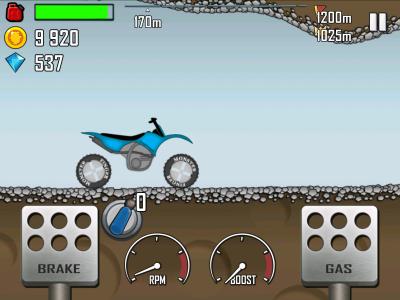 You can even buy upgrades for your vehicle and fine-tune its suspension, engine, mid-air control and tires.

When you start driving, you have a full tank of fuel. As you go on with your drive, your fuel tank starts emptying. But just in time a fuel container will arrive on your way and your job is to collect it, to continue driving.

There’s a section called the garage, where you can custom-create your own vehicle! You can add your own features and tires and the like.

So, that’s what I liked about this game. There are lots more vehicles to buy, my current favourite being the Motocross Bike, which is the best for me in all the stages I’ve unlocked yet. It’s a nice, relaxing game, but can test your patience too!