This is my story line used in the Lava – Kusha Video Story. It is written by me and narrated in the video in my own voice. Hope you all  watched it. Wanted to share the story line and the paintings here too.

Lava and Kusha are the twin sons of Lord Rama and Sita. Their story is told in the Uttara Ramayana.

After killing Ravana, Rama, Sita and Lakshmana returned to Ayodhya, and Rama became King. But the citizens of Ayodhya doubted her loyalty to Rama. Sita did not want to dishearten Rama because of her reputation, so she decided to leave the palace and live in the forest, even though she was pregnant. 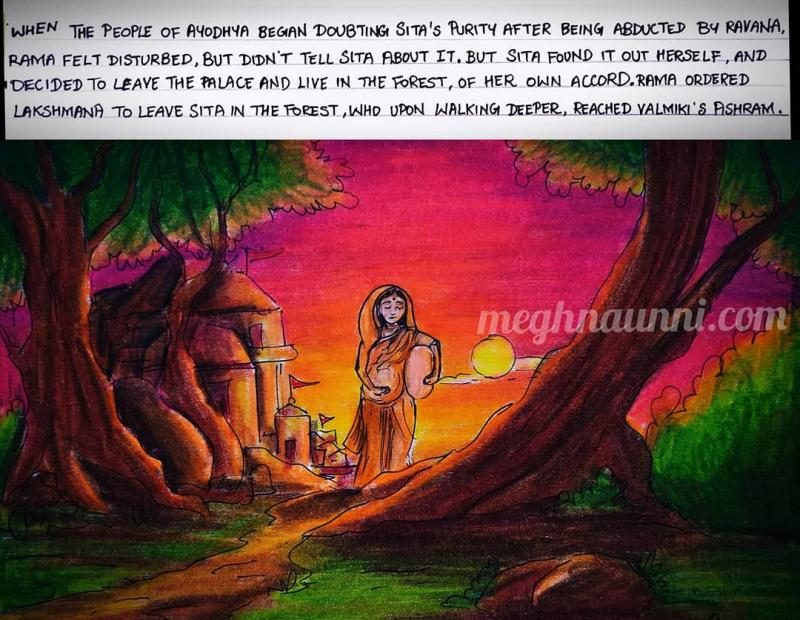 Sita was given shelter in Sage Valmiki’s ashram, and Valmiki agreed to be her child’s Guru. Sita gave birth not to one, but two sons, the twins, Lava and Kusha. 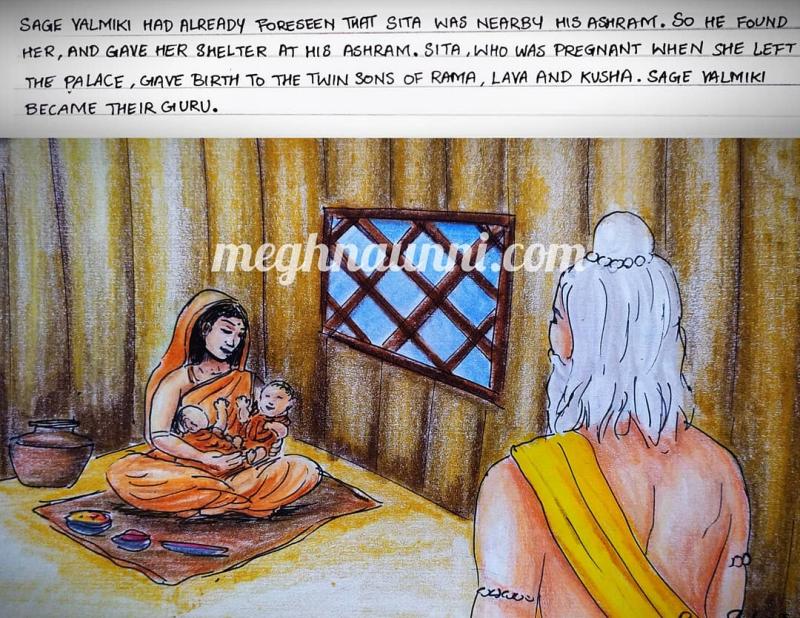 Kusha was elder to Lava. Both were extremely wise, brave and keen to learn. They were trained to expertise in archery and martial skills by their Guru, Sage Valmiki. They also learnt music from him. Valmiki taught them the Ramayana in the form of a song, but did not reveal to them that Rama was their own father. 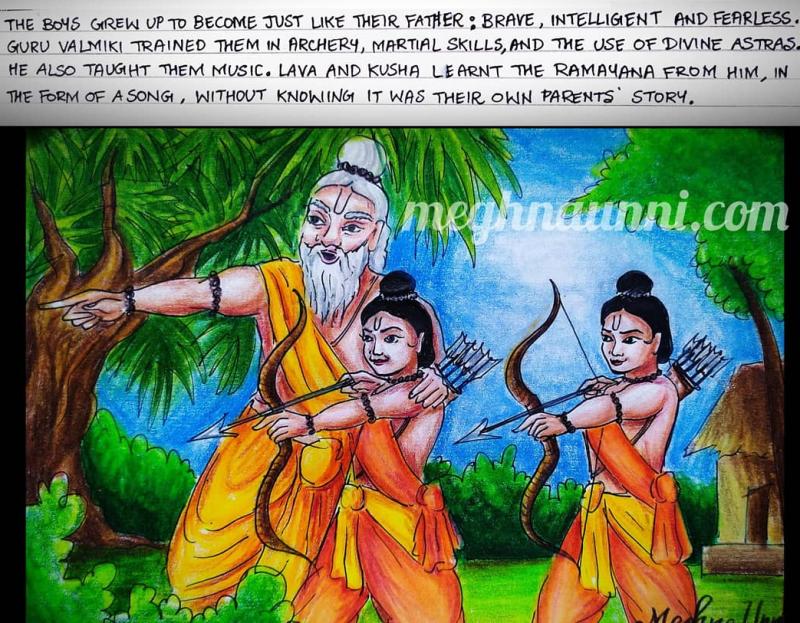 Both of them could not digest the injustice that was done to Sita, and wanted to question Rama about it. At that time, Rama was conducting the Ashvamedha Yagna at Ayodhya. The sacrificial horse was set free, and somehow it reached Sage Valmiki’s ashram. Lava and Kusha caught it, and challenged Shatrughna, who was responsible for bringing back the horse. The twins were excellent at archery, and defeated not only Shatrughna, but also Lakshmana, Bharata, and Sugriva. They even succeeded in taking Hanuman captive. They demanded that King Rama himself come to them and wage war, and not send his representatives. Rama was enraged, and was about to shoot an arrow at the boys, when Sage Valmiki intervened and reminded him that they were just boys. He convinced the twins to return the horse to Rama. 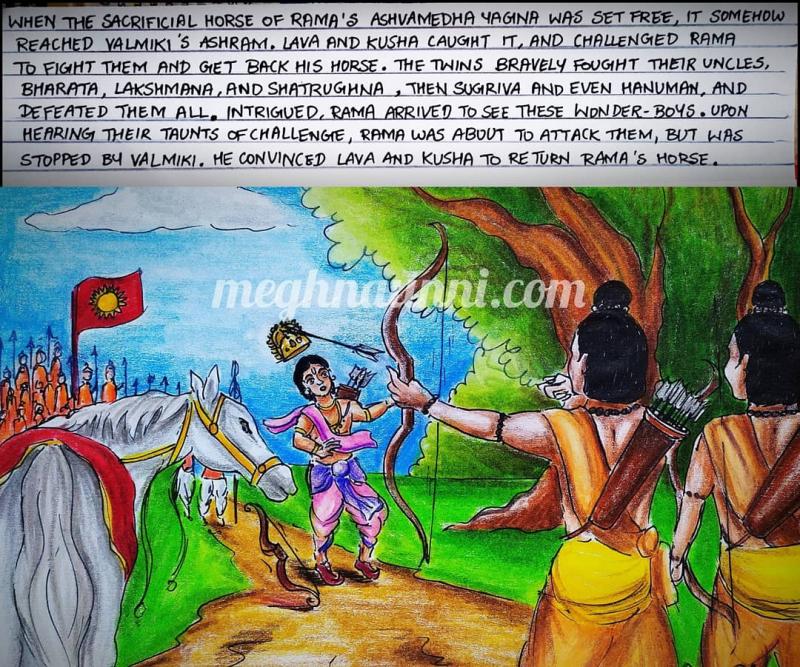 Back at the ashram, when the brothers told everything to Sita, she was shocked, and gradually revealed their father’s identity to the boys. They were shocked too. Then Valmiki told them that it was time for them both to go to Ayodhya, and ask justice for their mother, Sita.

As per their Guru’s advice, Lava and Kusha sang about Sita’s plight on the streets of Ayodhya, which eventually reduced the citizens to tears. This aroused Rama’s attention and he summoned them to the court. There, they both sang the song which sage Valmiki had taught them, the song of Ramayana. At the end, they both reveal the secret that they themselves are the sons of Rama, and that their mother is Sita. 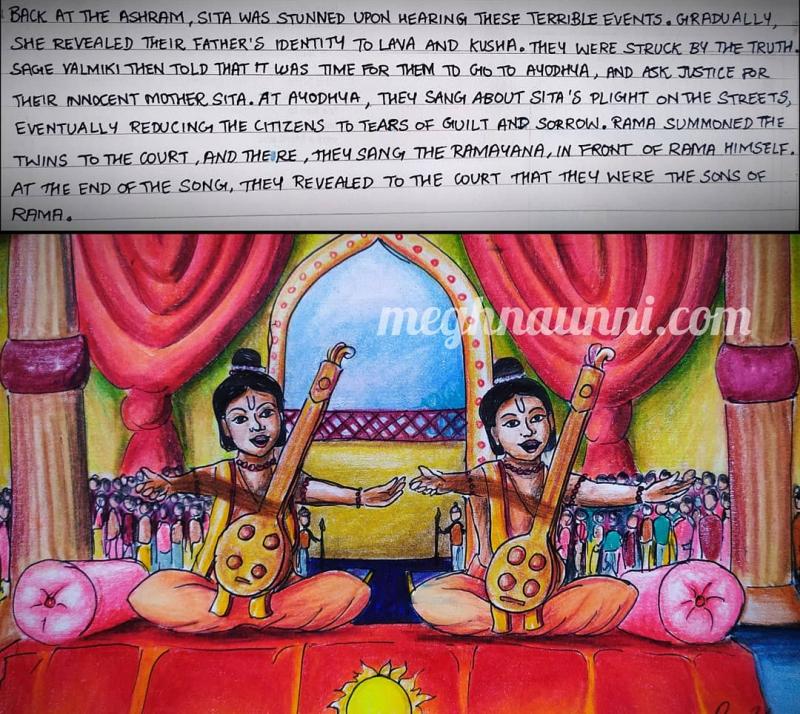 Rama summons Sita to the court. But then again the citizens accuse her of her purity. Tired of being accused for no fault of hers, Sita disappears underground to join her mother, Bhumidevi, leaving young Lava and Kusha alone with Rama.

This is the tale of Lava and Kusha. Thank you.

One thought on “THE STORY OF LAVA AND KUSHA : The Twin Sons of Srirama & Sita”