Dhritharashtra is one the main characters of the epic Mahabharata. While people may call him one of the main, I would like to call him the main itself. This is because, he is the main villain of the epic, not Duryodhana, nor Shakuni, as most people think.

The story of Mahabharata changed course when Dhritharashtra’s mother, Ambika closed her eyes in fear, when she saw Sage Vyasa. Because of this action of hers, her son was born blind. 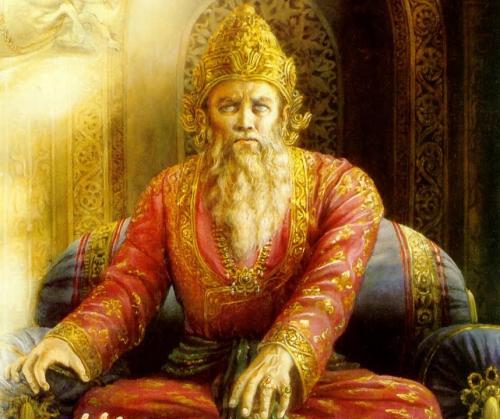 Even though he was the eldest of his brothers, Pandu and Vidura, he was not given the crown of Hastinapur, since he was blind. Hence the crown was given to Pandu, to which Dhritharashtra only displayed happiness, but in reality, he was burning inside with humiliation.

He was so desperate to sit on the throne of Hastinapur. He was made Pandu’s representative as the Emperor, when Pandu went to the forest. He was only glad to accept it, and since then he was forever on the dream of his son succeeding the throne after him. Dhritharashtra was extremely jealous of the Pandavas’ valour, skill and bravery, but never failed to appreciate Duryodhana on his too. He always assumed Duryodhana was strong enough to defeat his younger brother’s sons.

Dhritharashtra still wore Pandu’s crown after his death. But, as time went by, he gradually considered it his own, and not Pandu’s. He always acted lovingly and kind to the Pandavas, but never truly loved them as much as his own Duryodhana.

Shakuni had vowed to destroy the Kuru family. Being clever and cunning, he took advantage of Dhritharashtra’s broken dream of Duryodhana ascending the throne. He knew that this ambitious father would do anything for his son.

In this epic, there are sons who are blinded by their love and devotion to their father, as well as fathers who are blinded by love for their sons. Bhishma would do anything for his father Shantanu, and Dhritharashtra would do anything for his son Duryodhana. It is to be noticed that these feelings of ‘filial’ and ‘parental’ love, are the ones which slowly lead to the destructive Kurukshetra war.

Shakuni sowed the seeds of cunning in Dhritharashtra and brainwashed him that only Duryodhana had the right to the throne. Gradually, he started listening to Shakuni’s plots, rather than listen to Bhishma, Gandhari, and Vidura’s warnings and advise.

He sent the Pandavas to the wax-palace, in which they performed pseudocide. This satisfied Duryodhana very much, much to the happiness of Dhritharashtra too. But when he learnt that they were still alive, he was actually disappointed, but never showed it out.

Even though everyone favoured Yudhishtira becoming the crown-prince, including the citizens, Dhritharashtra could not bear the thought of it. After the Pandavas returned, he decided to give half the kingdom to his nephews, and keep the other half for Duryodhana. Obviously, he gave the parched, desert-like, wild region of Khandavaprastha to the Pandavas.

The invite of the dice-game could have been avoided, if it had not been for Dhritharashtra’s blind love for Duryodhana. When he first resented the idea, Duryodhana threatened him by telling he’d do suicide if he didn’t act according to his son’s wishes.

Dhritharashtra couldn’t bear this too. Hence he allowed the dice game to 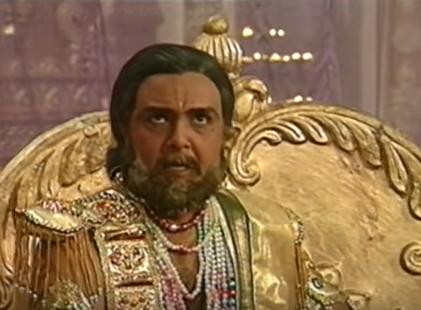 happen. He was the first of his ancestors to be so blinded by parental love. His long-ancestor, Emperor Bharata (son of Shakuntala, after whom our country is also called Bhaarat), did not find any of his own sons worthy enough to sit on the throne, and created a son out of the fire named Bhumanyu for the crown. Now, here is a father trying to find unjust ways to secure the crown for his unworthy son.

Had he intervened in the game of dice, had he tried to stop it, he would have saved his own sons from the vengeance of Pandavas. But he was a cowardly father, who feared his own son, who grew up to take advantage of his father’s immense blind love for him. He did not do anything, and let everything happen.

He only intervened when Draupadi was about to curse everyone in his court, including him, that he stood up and returned everything the Pandavas had lost. This was only out of fear from a chaste woman’s curse, and not out of love or affection for his nephews. The second game of dice also happened only due to this blind king’s ambitions, which resulted in the Pandavas’ 13 years of exile.

During the war, he was offered divine sight to witness all the major events of the war. But he refused, telling he wouldn’t be able to bear it if his sons died. So his charioteer Sanjay acquired it from Sage Vyasa, who narrated all the events of the war then and there to Dhritharashtra. Pandavas’ peace proposal by Krishna, and hence it was he himself who invited the war upon his own land, kingdom, sons, nephews and family. Even if history does put blame on Shakuni and Duryodhana, only Dhritharashtra will be completely responsible for it, because only he could have stopped Duryodhana from doing such things. He was the king, and it is the king’s responsibility to protect his kingdom. But this king only tried to protect his broken ambition, his unworthy son’s right to the throne, and never thought about his people, making him the worst king Hastinapur could ever get.

Thus Dhritharashtra was the main villain of the maha-epic Mahabharata, who could have stopped things from happening, but never even thought to do so.