I recently read SITA by Devdutt Pattanaik. It was an illustrated retelling of the Ramayana. The main unique feature I found in this book is that it tells many untold stories and backstories. Every character’s story is told in detail, yet not much long. 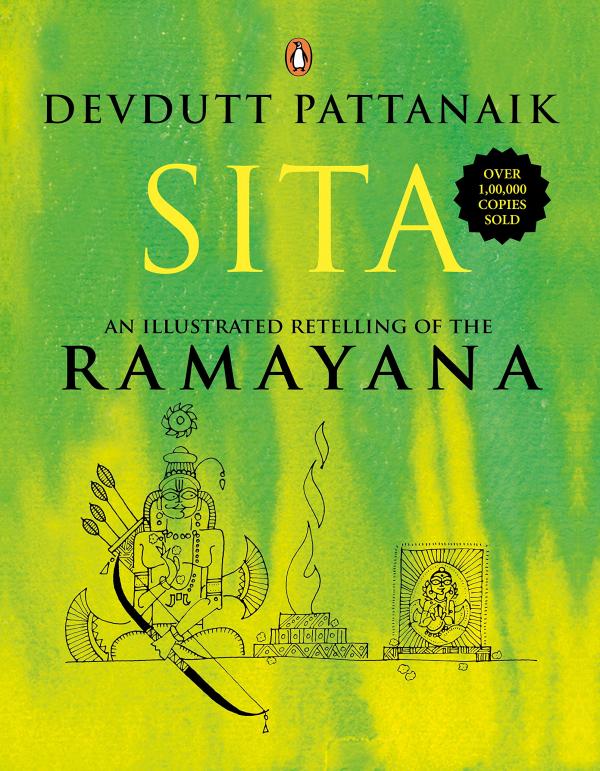 While mostly everywhere Sita is considered a victim, here Sita is not, and she is independent. She is Goddess: Independent and Ram is God: Dependable.

Devdutt Pattanaik’s retelling of the Ramayana holds many different events and stories, which are not often heard. After every small chapter, he includes fact-boxes, which are quite distracting, to be honest. But all the same, they are very interesting. We come to know of many untold characters, their stories, character comparisons in other epics, and other very different retellings of the same chapter through these fact-boxes.

SITA’s Sita can lift the heavy bow of Lord Shiva, while no one else in Mithila can. Sita attends the various conferences with her father Janaka along with the learned and wise rishis and sages. She and her sisters have very curious minds, and Sita regularly asks questions. Her father takes them all to witness sage Vishwamitra’s yagna, where she sees Ram for the first time.

I find this very different from the ones I’ve usually heard, because Ram meeting Sita in Mithila’s royal garden is a very popular scene in dramas, dance pieces, movies, serials and books.

Janaka’s daughters and Dasharatha’s sons marry at a very young age, as boys and girls. The book also tells in detail the stories of Ram’s ancestry, Parashurama, and related ones. The book also contains philosophy at a bit high level, and both Ram and Sita are well-learned in it.

As the story progresses, the Sita who asked questions, starts accepting things without questioning. She is seen to be independent in her actions, and Ram struggles to be both king and husband.

Even amidst the rakshasis in the Ashokavana in Lanka, Sita was always calm and bold. She knew Ram would come for her. Here, the narration of the story goes into the point of view of Hanuman and Sita. Hanuman finds Sita, and tells her what happened after Ravan abducted her, which is what we read in the book.

Even though Ravan is Ram’s enemy who abducted his wife, Ram sees goodness in him. He says Ravan has ten heads. Nine of them were full of his greed, lust, malice and cunning. But the last one was of knowledge, since he was a brahmana. Ram regrets killing that head.

This book also reveals a story I’ve never seen or heard before: Sita killing a twin of Ravan as Kali. This twin was supposed to be more powerful than Ravan, but Sita emerges as Kali, destroys him, turns back into the demure Gauri, and becomes Ram’s Sita again.

The book reveals what life in the forest could actually be like. Usually, such realistic and logical things are not shown in the light in most visuals. But, ‘SITA’ does. Odd enough, Ram and Lakshman have beards and moustaches, since they’re supposed to be hermits for 14 years. When they return, they are ‘curled and oiled’. I’ve never seen Ram having a moustache anywhere else but here. But all the same, it does makes sense.

Devdutt Pattanaik often compares Ramayan’s Ram to Mahabharat’s Krishna. Ram who is Maryada-Purushottam, would sacrifice his own wife to upheld rules. Yet, Krishna bends rules to help Dharmic people succeed.

Sometimes Ram’s behaviour in the book questions me. He could behead Shambuka, his own subject for leading all the citizens into meditation, but punishes his innocent wife for the wagging tongues of the citizens.

She lives independently in her hut, raising her sons, Luv and Kush. They learn everything from their single mother, and she teaches them good values. Here, it is interesting to know the differences between the twins. Both excel in archery, but Luv can hit moving targets, while Kush can hit distant ones. Luv likes conversation, while Kush prefers silence.

Ram becomes ever-stoic towards the end. He almost literally shouts at Sita indirectly, but did not actually mean it. To this Sita calls upon the earth, and disappears into it. Ram wished Sita would have atleast talked a word to him before departing.

Devdutt Pattanaik says Ramayan is a cycle. The four yugas take place continuously, and hence all these events take place again and again. But Sita will never be at peace, in any form. Radha was Sita reborn, but again, Krishna left her and went to the city, breaking her heart once more.

Many people have created their own retellings and versions of Ram’s story, many with very different opinions and visions. But this ‘SITA’ is a perfect mixture of all the varieties, which tells the story of Ram’s Sita and Sita’s Ram.

Another thing I love about Devdutt Pattanaik’s books is that he creates his own illustrations. It is so amazing that he can actually visualise his unique thoughts and draw them beautifully on paper. And his illustrations are unique too: abstract and simple, but convey the meaning perfectly.