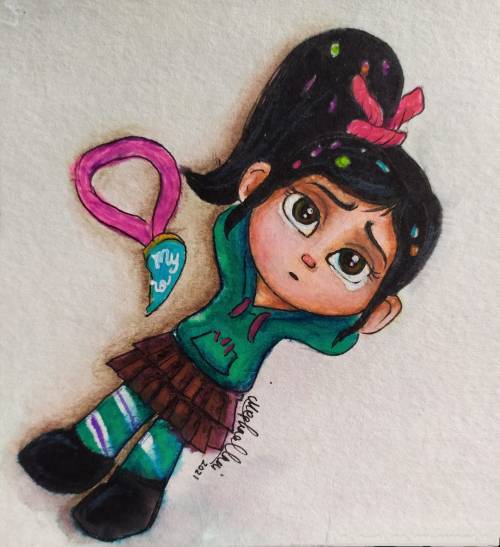 Hey guys! This is my first trial at writing fan fiction, I have no idea how this will turn out :P. So, this scene mainly focuses on Vanellope from the movies Wreck it Ralph (2012) and its sequel, Ralph Breaks the Internet (2018). It takes place one month after Vanellope abandons Sugar Rush and Ralph and shifts to Slaughter Race, which was her dream game. But sometimes, to achieve your dreams, you’ll have to sacrifice a lot of important things, such as Ralph’s friendship in Vanellope’s case. She misses Ralph very much and keeps thinking about it, eventually questioning herself whether she did the right thing moving into Slaughter Race. Usually, when we keep thinking about something really sad, the thoughts that continue can be even more destructive and sadder. But when you think about such stuff from a different perspective or angle, you’re bound to understand the true reason behind it and finally overcome it with the help of some advice from someone or by doing what you love the most, which will definitely cheer you up.

This scene involves only Vanellope, other characters like Shank, Ralph and the Disney Princesses are on their way! Please Comment below if you liked this chapter and would like to read the next one!

It’s been a month since 9 year old Vanellope abandoned Sugar Rush and started her new life in Slaughter Race.

She terribly missed Ralph. To be honest, back then she was getting a little bored going to Tapper’s and chatting with Ralph every night. She never showed it because she didn’t want to hurt him. Not that she didn’t enjoy his company, but she was not particularly enthusiastic about doing the same thing every day and night. Even Sugar Rush was boring her a bit. There was nothing beyond the ordinary in the arcade that could fascinate the little girl anymore.

It had been two whole weeks since she had spoken to Ralph. The bad guy (with the softest heart a bad guy could ever have) in the arcade game Fix It Felix Jr., who she had met on a candy-cane tree in Sugar Rush six years back. They had never been apart for so long. She had never realised how much affection Ralph had for her. He risked his own life for saving hers. He ventured into the unknown world of the Internet just to make her happy.

The more she thought about it, the more she realised how much she meant to him. And she never did anything for him that equaled what he had done for her. All she did was yell unbelievable things at him and break his pure heart. She had also yanked off the ‘You’re My Hero’ cookie medal she had made for him 6 years back and threw it away. She was ever so embarrassed when he showed her the broken halves, before parting in the previous month.

She took her half out which was tucked inside the front of her mint green hoodie. That medal had meant so much to him. Ralph had said that the breaking of the medal was a good thing, so that now they could both have a half to remind themselves of each other. Was that right? Could it also be right that her friendship with him had also snapped in half along with the medal?

She could neither decide what to make of her own actions and thoughts, nor could she bring herself to brood on about all those things she did to Ralph, who had nothing but good intentions for her. You should have seen his face when she told him they were still best friends, no matter what, after all that had happened on the Internet. It was the purest expression of happiness in the world. Sure, he did put a virus into Slaughter Race, she was so furious at him for that then.

But when she thought about it from a different perspective, she understood that he did it because he feared losing her. A game character does not regenerate unless it is his or her own game and Slaughter Race wasn’t Vanellope’s game at that time. As Ralph feared, she could have died  in those deadly car races. He was right. Maybe Vanellope, said a tiny voice in her head, you should have stayed with Ralph and gone back to Sugar Rush where you belong. You abandoned the game Ralph had brought back for you with so much hard work and love, not once, but twice.

She couldn’t help but ponder whether she had made the right choice, following her dream into Slaughter Race.  As she lay on her bed in her room, playing with these guilty thoughts in her mind, there was a soft knock on the door. It was Shank.

‘Hey, you in there, V? The next game’s just about to start.”