Heyo! Chapter 2 is here, and it’s again about Vanellope, but Shank enters the scene too. There’s also a racing scene in this chapter, and wait till you see what Shank does in the next chapter for making her little friend Vanellope happy.

A Race to Cheer Up

Vanellope recovered from her momentary depression and made up her mind to race. “Yeah, Shanky, I’m coming out.”

As she made her way out of the house, which was where the crew of Slaughter Race took rest during intervals, she saw that Shank was waiting for her in her popular red car. Shank had really touched Vanellope’s heart since when they first met, and now she was no less than Ralph for Vanellope. She could be really nasty at times, but also the kindest woman in the game itself. Vanellope was kind too, but not as kind as Shank as she was bound to lose her cool within seconds.

She was also an expert in identifying someone’s problems and giving the perfect advice to sort it out. Vanellope wanted to cry her heart out to Shank like she did to Ralph once. But she was never really a crying little kid. Yeah, since Ralph entered her life, she had become quite tearful at times, when Ralph destroyed her kart six years back, when they parted after she became her true Princess self, after when she yelled and closed her friendship with Ralph in her fury that he had been spying on her and during their final parting last month after Ralph was saved by the Disney Princesses from falling to his death from the Google Tower.

The Disney Princesses. An idea struck her mind. That website which she had visited was such a joyful and learning experience. She had found her first song with the help of those Princesses. Maybe she should visit them again and learn a few points on handling depression. Surely someone there would know it, that one with the long golden hair, what was her name again? Ah yes, Rapunzel. She and another one with a yellow gown and a book had mentioned about being ‘kidnapped and enslaved’. Surely enslaved and kidnapped people would have had to handle depression from being separated from loved ones, which was exactly what Vanellope wanted advice on. She couldn’t decide whether she was being silly. Nevertheless, it would be fun to talk to all of them again, especially that sassy, platinum-blonde haired one with those amazing ice powers and blue ice gown. She had seen Queen Elsa use her powers to freeze the ocean water another girl (probably Moana, she didn’t remember all of them) had summoned with her powers to make an ice-slide to save Ralph, and she was utterly blown away by the sight. That room was a unique mix of different personalities, nationalities and eccentricities. That lady who claimed to have ‘exchanged her voice for a pair of human legs’ and still remained excited about it had certainly alarmed Vanellope. But still, she enjoyed that visit and she particularly liked those Princesses with powers, she felt like they had a lot in common.

Her mind distracted from pining for Ralph, Vanellope made her way to get her green car from where she had parked it last. Shank had noticed that she had been rather quiet during the breaks for a few days. “What happened, V? You look rather dull.”

“Oh, it’s nothing, I’m fine. Just missing Ralph a bit,” she said to Shank, although mentioning Ralph made her feel she would cry again. But she shook off the thought and prepared herself for the upcoming race.  She didn’t want anyone to see she had been crying. It was then that she noticed that Shank was looking at her intently.

“Oh,” replied Shank, and she became lost in thought, quite unlike herself. Vanellope didn’t know how to react, so she drove up towards the start of the race along with Shank and joined the others.

“You want to talk to Ralph, little sis?” asked Shank, as they drove together.

Vanellope thought for a while. “Tell you what, Shanky, I want to actually meet him again. Not on video call, in real life. There’s not much you can exchange on a video call,” said the kid, remembering the last time she had physically talked to Ralph. “I want to sit on his shoulder again and goof around like we used to do back in the arcade.” She missed his lame jokes and all the silly stuff they used to do.

“Mmmm.” responded Shank. They reached the starting point just in time before the human player’s avatar started driving his car to reach his destination. Shank, Vanellope and the rest of the crew began their job, trying to stop him.

Racing was the only time when Vanellope let go of all her dull thoughts and enjoyed her time. It was even more fulfilling when she used her glitching powers to speed up or pass through a very big obstacle on the road. It was the time when she was completely being herself. These roads were far more interesting than those in Sugar Rush. Back there, only a few tracks were present and she had to drive exactly in the same way every race. Moreover, she won the race almost every time. The game was becoming monotonous for her. When she first saw Slaughter Race, she fell in love with the place: the unpredictability and adventure seemed to attract her.

As she pulled her mind back to the present, she saw that the human player was still speeding towards his destination with no one to stop him. Shank was following him close behind, trying to find a way to block him. Vanellope swerved rightwards into a flyover and advanced faster than the player and Shank, glitching to avoid a truck coming her way from the opposite direction. When she was way ahead of the player’s brown jeep, she made a quick deviation to the left where there was a gap in between the low walls of the flyover and let go.

As she steered into a powerdrift from a drift jump to block the human player, she smirked at  him with a glint of victory in her eyes. The player lost track of the road due to her sudden appearance and crashed sideways into the wall. Shank roared in joy and looked proudly at Vanellope. 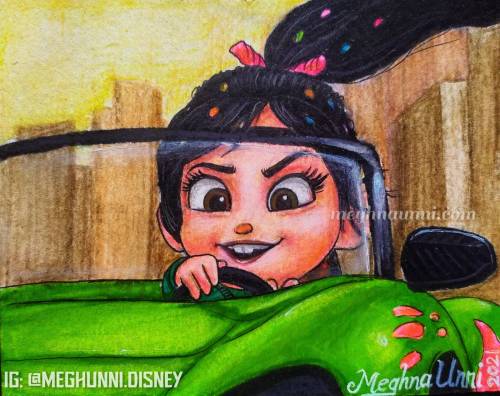 “This is what you get for messing around with Shank’s crew, Player45T908!” Vanellope shouted happily at the unconscious racer as the voice of the game announced, “GAME OVER”. Shank grinned at her. This kid is one gifted racer, she thought, as she gave her a fist-bump.

Vanellope danced around in joy, all sorrow forgotten. As she always said, racing was in her code.

A Race to Cheer Up | A MARVER Adventure: Disney Fanfic Chapter 2
Tagged on: Story Writing

One thought on “A Race to Cheer Up | A MARVER Adventure: Disney Fanfic Chapter 2”