Narasimhi is the Shakti of Lord Narasimha, the fourth and lion-man form of Lord Mahavishnu. However, according to the Puranas, Narasimhi is the Shakti of Lord Sharabeswara, a fierce aspect of Lord Shiva. She is also called Pratyangira, the woman-lion goddess who throws the stars into disarray by shaking her lion mane.
Pratyangira, with the face of a lion and a human body, is one of the chief warrior goddesses of Lalita Tripura Sundari’s army called Shakti Sena. Adi Parashakti at an earlier time during the war between Her and Bhandasura gave two boons to Pratyangira that the protection offered by Pratyangira is invincible and no deity can overcome it. Also when invoked for offensive purposes Pratyangira gives invincibility and sure victory to Her devotees. Thus Pratyangira is a very popular deity among the Kshatriyas warrior caste. She is often described as the ultimate Goddess to be worshipped for defensive and offensive power.
She is shown as dark-complexioned, terrible in aspect, having a lion’s face with reddened eyes and riding a lion, wearing black garments. She wears a garland of human skulls; Her hair stands on end, and She holds a trident, a serpent in the form of a noose, a hand-drum and a skull in Her four hands.
Done using Camlin Acrylic paint on Watercolour Sheet (no references used, completely own creation). 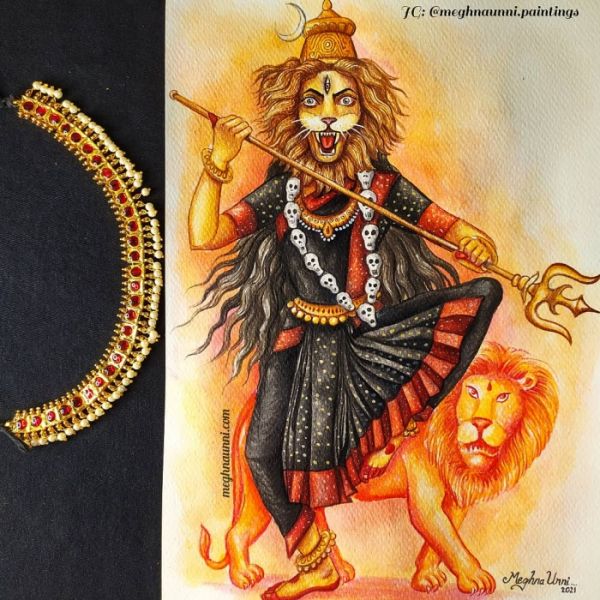