Friends play an important part in everyone’s life. Every single person is bound to have at least one friend, at least for the sake of it.

True friendship is rare nowadays. This is because most of the people in today’s generation are more selfish and arrogant than the earlier generations. Today, most friendships are made with the secret motive of exploitation. Innocent people are tricked into fake friendships that ruin them later. 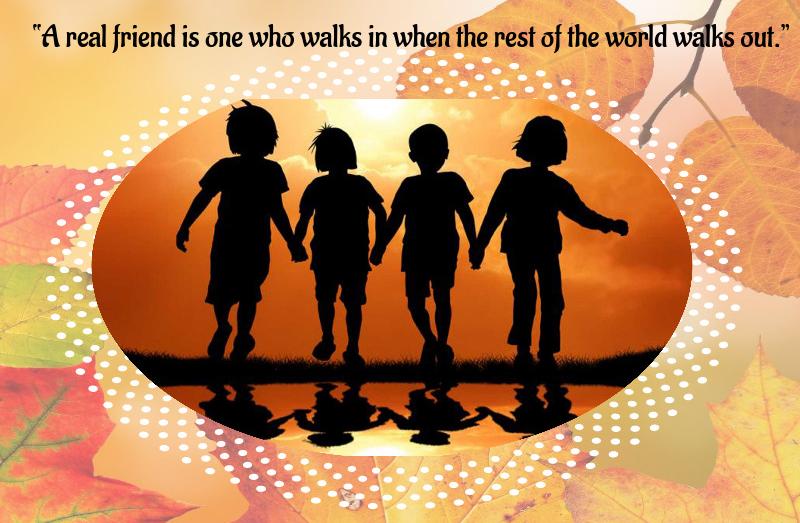 True friends are those who are ready to sacrifice anything for your sake. They do not act as good or bad, they show their true self to you. They do not fear or suspect in confiding their flaws or in telling their secrets to you.

How to be a good friend?

First of all, a good friendship means being able to confide successfully in each other. This means that if a friend tells you a secret that is not supposed to be known by others, then you must prove your friendship by not babbling it out to others. And you must also confide in him or her, but only if you are convinced that he or she is a real, true friend.

Then is importance of listening. If a friend is telling you something, then it is important that you listen to him or her with full attention. Never interrupt and try to change the topic. It is the most annoying feeling, when you’re saying something with so much interest, and your listener suddenly changes the topic, just plainly revealing that he or she was not at all interested in your talk. Such behaviour will not promote true friendship.

Encourage and speak nice words. That’s essential for building a strong friendship. When you encourage him or her by telling things like, “I know, you can do this”, or “You are the best in this” or something similar which would gear up the confidence in your friend, it is sure to boost his or her self-belief and simultaneously strengthen the bond of friendship between you both.

Be ready to do anything for him or her. You have to show that nothing is a barrier between your friendship by doing anything for him or her. But this is also one of the big mistakes true friends do. It is very important that true friends make sure that their friends don’t fall into evil traps or plots. In such dangerous situations, friends are the ones who should give correct advise and bring his or her friend back to a safer situation. It’s also important that you do not befriend people who are corrupted and spoilt by bad thoughts. Once you realise that your new friend is such a person, you must either try to change him or her or better back out from this friendship. Such friends are sure to have a bad influence on you.

How to identify a bad friend?

A bad friend literally means who is not actually supportive, adept at making you spend your resources on him or her, makes you start doing bad habits influenced by him or her, makes you even start speaking in a bad language. He or she will always give you fake smiles and fake encouragements.

“A friend in need is a friend indeed.” Haven’t you heard of this famous proverb? A friend who helps you when it is really needed, like saving you from an unpleasant situation, helping you when no one else does, making you understand something important at the last crucial moment, helping you achieve something when it is actually bringing him or her downwards, or affecting him or her negatively.

The one popular type of friendship being made nowadays is the one based on fandom. I’m not telling it is bad or anything. Fans of a famous celebrity or cricketer are more bound to be friends than others with no such common likes. It is sometimes a good thing, but the other normal type of friendship will be more true and stronger than the fandom friendships.

There are even few people, who claim to be very true friends, and in their this claim (which can sometimes be false, formed due to politeness or other intentions), they fail to recognise other people who can actually be a true friend. Sometimes, people get crazy over their friendship and always think of their friends and talk to them over the phone for long hours than what is needed. Such friendships will only weaken over the years and after a few years, such people won’t even be in contact with each other.

The schools today also have a hand in not allowing the formation of true friendships from a small age. Earlier, students were not shuffled every year. The same batch of students studied together till they left the school. Hence more and more true and retaining friendships could be made. But now?

Every year almost all the students are shuffled and by the time schooling is complete, a student would have studied with everyone of his or her age. This may have created lots of small, for-the-sake friends, but none of them would be a strong and sweet friendship. A good and true friendship forms over time. You need lots of time to ensure whether your newly made friend is true, honest, and innocently-lovable to return the friendship back and strengthen the bond. If you keep on separating them by shuffling them each year, then there won’t be time to make true friends. And gradually, the once-made friends would lose touch, and become strangers within a year or so. This happens in almost every school.

Anyways, true friends will always be there to help you out during bad times, give you good advise, as well as support you in uncomfortable situations. It’s important that we make true friends so that there’ll be people for you to keep in touch with during times of loneliness and to get help from during times of need.

Importance of Friends in Life
Tagged on: children writing    Writings