The destructive Covid-19 has forced us all to stay home. In response to that, DD National has started a re-telecast of the famous Ramanand Sagar’s ‘Ramayan’ and B.R.Chopra’s ‘Mahabharat’. I think it’s a very good initiative taken by the channel. Finally, even today’s generation will be able to watch and understand the two great epics of our tradition!

Starring Arun Govil as Lord Rama, Deepika Chikhalia as Goddess Sita, and Sunil Lahri as Lakshmana, this mega-serial, which is the most watched Indian Television serial during its first telecast from 1987-88 is an amazing depiction of the Ramayana. Arun Govil, Deepika Chikhalia and Sunil Lahri became extremely famous for their acting in this serial. Their portrayal as Rama, Sita and Lakshmana was so perfect that during those days, people actually believed that they were the real characters. The costumes, the jewellery, the sets, and of course, the dialogues and acting were excellent and it could be noticed that they were carefully selected to match the description of the actual character in Valmiki’s writing. 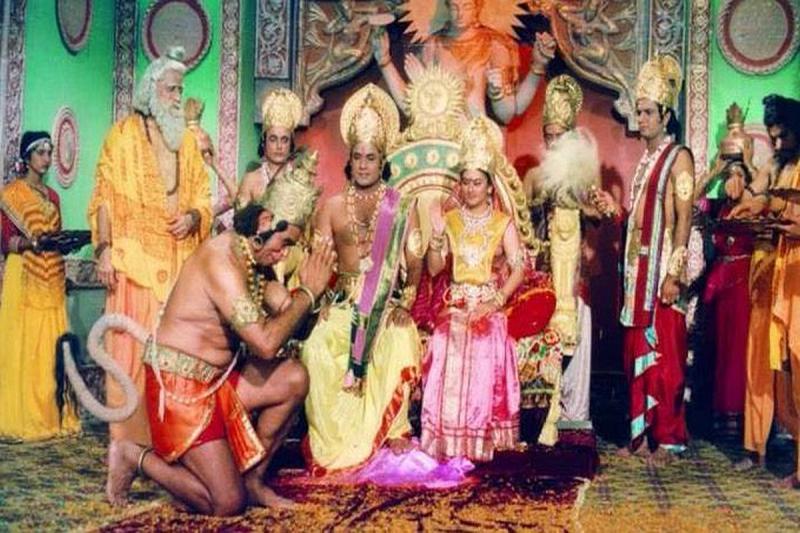 The only flaw that could be seen in this serial is the underdeveloped technology. The editing and animations were a bit artificial. Otherwise, no other Ramayana serial can surpass this excellent one. Even though some scenes are a bit exaggerated, going on for more than 10 minutes, it only helps in the effective portrayal of that role. These type of long scenes help the viewers in understanding the mind and intentions of each character, which according to me only long novels could do. The pain of separation between Rama and Sita, the devotion and loyalty of Lakshmana and Hanuman towards Rama, the foolishness and stubbornness of Ravana, the siding of Vibheeshana with truth, the pining of a mother for her son, the jealousy of a stepmother, and the divinity of the Seventh Avatar of Lord Mahavishnu as a Maryada-Purush, that is, one who never deviates his path from decency and righteousness.

Hence, since it is being telecast now on DD National, I suggest this serial to everyone so that they can learn values of dharma as well as understand the story of Ramayana. Even if I don’t suggest, I am sure that those people who had been kids when they watched the first telecast during 1987 and 1988, are sure to make their kids watch their once-childhood-evening routine!

According to me, there is no other Mahabharata TV Serial or film which is better or even near to the level of perfectness in this serial. The best ever telling of a story, which is so vast and complicated was accomplished with the telecast of this serial from 1988-1990. There are 94 episodes, each playing an important part in the depiction of the story. Starring Nithish Bharadwaj as Lord Krishna, the 8th Avatar of Lord Vishnu, the actor’s brilliant and excellent portrayal of Lord Krishna brought him as well as the serial, lots of popularity. Not only him, every actor and actress portraying different important characters of the Mahabharata caught the heart of all viewers. Their faces, behaviour, costumes and dialogues were all excellently well-matched with their corresponding characters, that made viewers believe that it was a real visual of the epic, rather than a TV serial! 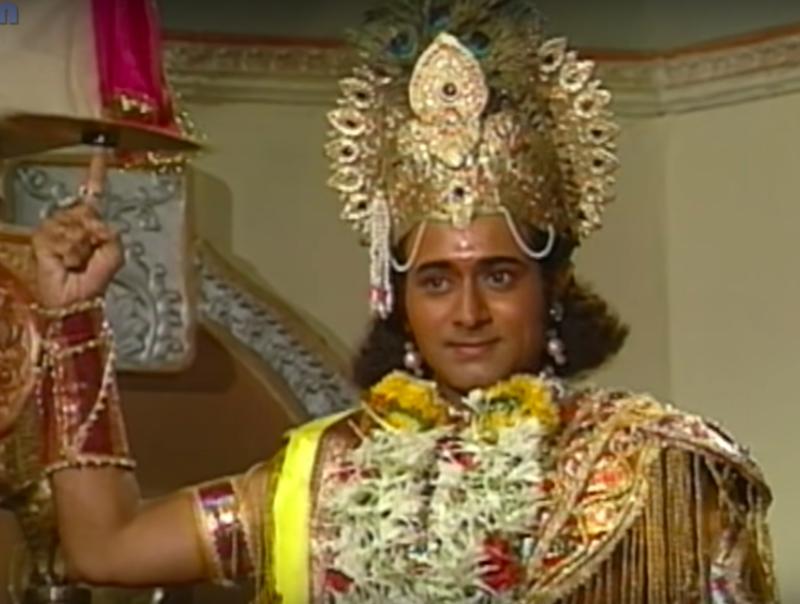 Each episode would start with a small narration by Time, voiced by Harish Bhimani. You will surely try to memorise the title song, “Atha Shree Mahabharat Katha” once you hear it. The dialogues are all heart-touching, and of the type that remains in your mind. 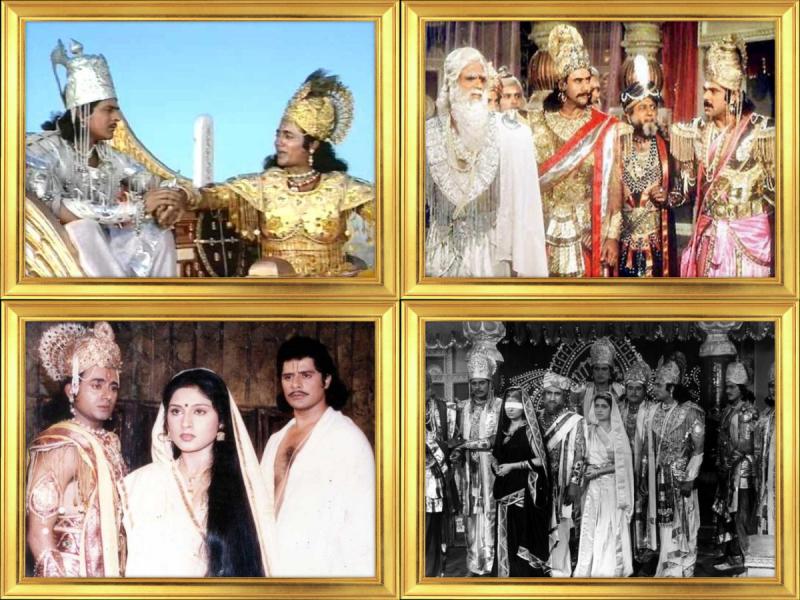 The best and most popular episode is the one in which the disrobing of Draupadi, or Draupadi-Vastraharan, takes place. Many people have tried filming Mahabharata as serials and films, but none of them can be as good as this one, most importantly, this scene. The exceptional acting of Draupadi by Rupa Ganguly has acclaimed praise and applause by many critics. Her fiery dialogue-delivery throughout all the episodes really does convey the fact that she was born of fire. 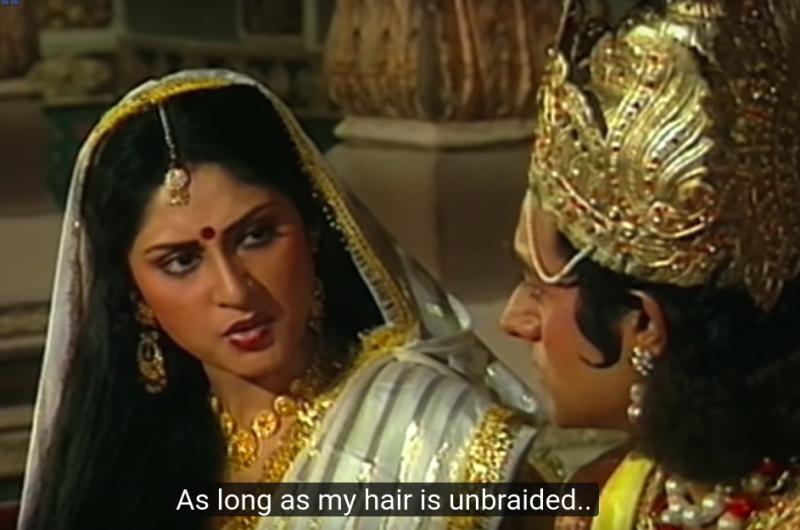 The maniacal laughter of the villains, Duryodhan, Dushhasan, Shakuni and others makes them really appealing as true evil plotters. The nonchalant dialogues and behaviour of Dharmaraj Yudhishtir, the easily-angered, vehemant Arjun, the decent and stubborn Karna, but unlucky throughout his life, the crooked and evil plots of Shakuni, the selfish blind king Dhritharashtra whose heart was also blinded by the love for his eldest son, the loyal Bheeshma who was put into a great dilemma throughout the story till his fall, the greedy and jealous Duryodhan prompted by his evil uncle, and the bitter truths spoken by wise Vidura are all masalas that add flavour and eminence to this great melodramatic serial. But nothing can be more overwhelming than the acting of Nithish Bharadwaj, just like Arun Govil in Ramayan. His expressions and perfect dialogue-delivery is even more finer than the dialogues themselves. In short, the perfect person for portraying the naughty, brilliant and logophile Krishna, who forever supports the Pandavas and even sometimes performs unrighteous acts to protect righteousness! The depiction of the narration of the Bhagavad Gita is one of a kind. It goes on for about 2 full episodes, but does explain it all in a simple language that can be understood by common people. 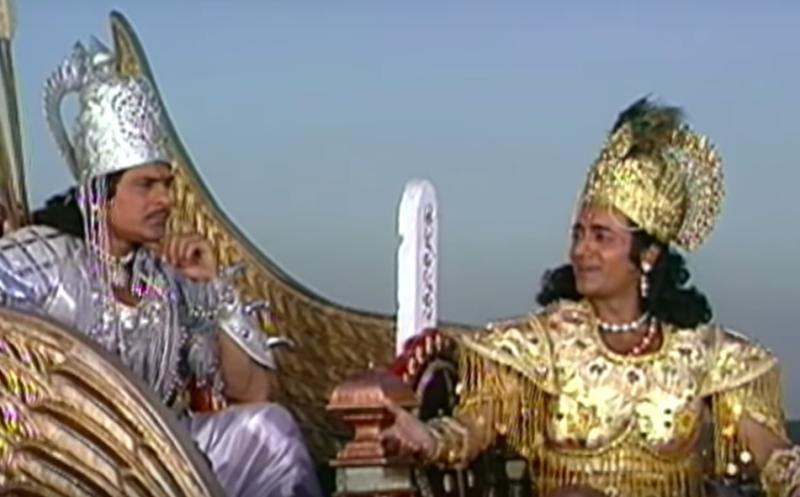 The saddest scene is probably the one in which the young Abhimanyu is killed brutally by 7 great warriors simultaneously. This scene is sure to bring tears to your eyes. Such is the filming done by B.R.Chopra. The sets are just mystifying. The palaces and halls look just like they’re ancient and constructed by fine architects of that time. The costumes and jewellery are exceptional. Each main character has a special, default costume like a full silvery-white one for Bheeshma, with similar ones for Arjuna and Yudhisthir, to show their pure minds. A red one for Duryodhan to show violence and greed. Black for Shakuni to show evil. 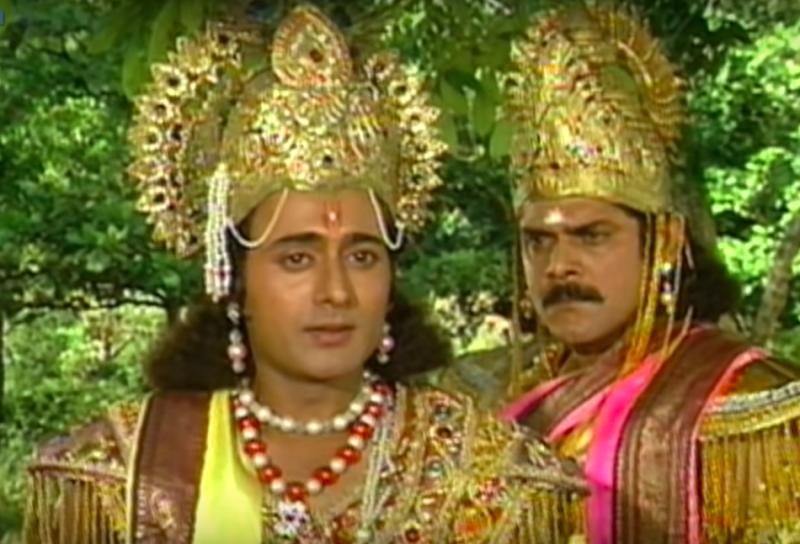 Pink for the brave and generous Karna, and also of his deep friendship with Duryodhan. Similarly, every character has something or the other to denote his or her character’s identity. I’m sure that none of the other depictions of Mahabharata would have had such intricate and perfect interpretations. 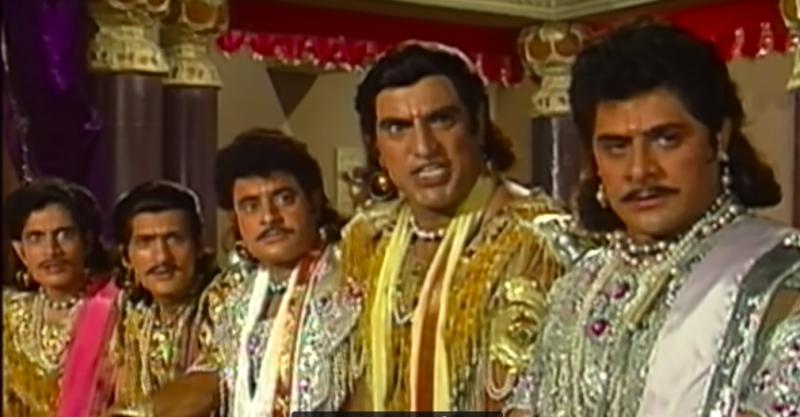 The war strategies and the war events are explained properly to the viewers through scenes, narrations and visuals. The emotions of grief, vengeance, anger, and regret can even be felt by the viewers. The editing and animations are still artificial, but better than Ramayan. The rivalry between few enemies when they meet can be found a little funny, for example the dialogues between Duryodhan and Bheem, Arjuna and Karna, Bheeshma and Shikhandi, Krishna and Jarasandha, Sahadeva and Shakuni, and even Draupadi and Duryodhan. The funny dialogues sometimes by Krishna during times when everyone around is sitting distressed and tensed are bound to make anyone laugh.

His looks and dialogues display audacity, fearlessness, a strategical-mind, and humour as well.

In short, to make your boring Covid-19 vacation more exciting and eventful, I would suggest you to watch the Mahabharat serials that are currently being telecasted on DD National!