I just finished reading ‘The Palace of Illusions’ by Chitra Banerjee Divakaruni. It was an amazing book. This novel traces the much sung-about life of Draupadi, one of the main protagonists of the celebrated epic, The Mahabharata. 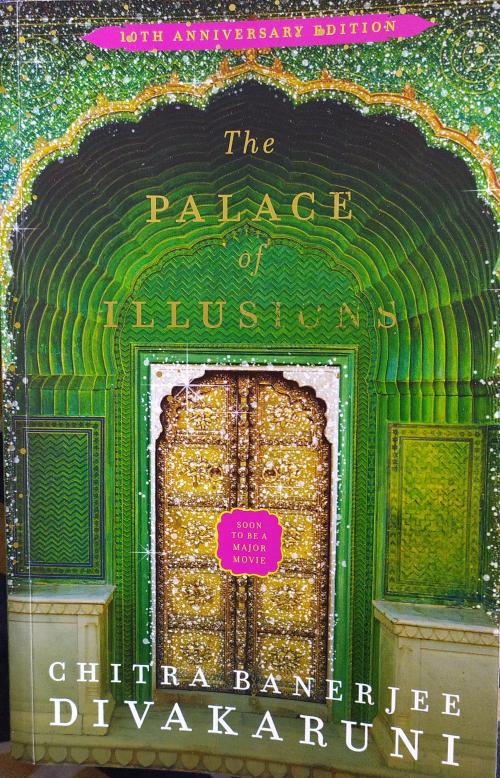 While most of us have heard, read or seen Mahabharata as the story of struggle between brothers of the same dynasty, it is rare to come across an interpretation of the same story from the point of view of a woman. The novel starts right from her fiery birth, with the prophecy that she was born to change the course of history. From then, she used to dream how that would happen. She had a quite lonely childhood, since she was neglected by the other queens and children of King Drupad. She only had her brother Dhrishtadyumna, also born from the same fire as she had, and her nurse, whom she fondly called Dhai Ma for company. According to her, theirs was the only true love she had felt in her life.

But there was one character whose presence could relieve all her pains and troubles. The one with the same dark skin as her, the one who sported a peacock-feather on his crown. He regularly teased her and often explained everything in riddles, which she couldn’t understand. He called her Krishnaa, a variant of his own name, Krishna.

When her father announces that her swayamvar would be conducted soon, she becomes excited that she’ll actually get to choose her husband. She is shown the portraits of all her suitors, and she secretly falls in love with Karna, with sad, ancient eyes. But, her father, brother and Krishna want Arjun, the third Pandava to win the swayamvar. She makes the first mistake of her life when she insulted Karna in front of all, asking him his parentage. Then comes Arjun, disguised as a Brahmin, wins her and takes her home to his hut.

There she is subject to the order of her cold mother-in-law, to marry all the five Pandavas. All through her life, Draupadi never truly liked Kunti, because she was always aloof , indifferent and rude to her, because of a dark secret she forever carried within her. She never completely accepted the Hastinapur palace as her true home. She only finds the great Grandsire Bheeshma a loyal, dedicated man, who upon her wish, suggest that the Pandavas get a separate kingdom to rule. Draupadi didn’t like Hastinapur because there were too many people who hated and despised her husbands there. Hence, they were given Khandavprastha, and with their efforts and the help of Maya, the demon, they build a majestic palace and a kingdom named Indraprastha.

Draupadi names this magical palace of hers ‘The Palace of Illusions’. The years spent at this palace are the only happy and peaceful ones Panchaali can ever remember. The rest of her life has been full of trickery, shame, exile, and most of all vengeance. Known to be sharp-tongued, she often criticised her husbands. She wanted to be loved truly, but she was loved by people she didn’t recognise as true love. Even though she had five sons, she could not be a loving mother to them.

Life always had some or the other adventure, be it happy or painful, for Panchaali. The shame she went through in the Kuru court in front of all fueled her supply of vengeance. Throughout the thirteen years of exile, she made sure her husbands did not forget her insult. Often Krishna visited them. His visits were the only thing she looked forward to, even though he tried, but in vain, to counsel her into dampening this fire of vengeance. She never could understand nor put into effect the advise Krishna gave her. He often saved them from unpleasant situations. All through her life, her close friend Krishna played an important part in her life.

Then was the war. This novel is perfect for understanding the true effect of a war such as the one in Mahabharata. The fear of the warriors, their loved ones, the fate of the innocent soldiers and their to-be-widowed wives. The dilemma of the eldest Kuru warriors, and the cosmic vision of the Lord by Arjun.

Surprisingly to me, Panchaali is gifted with a vision by Vyasa so that she can see the important events of the war, similar to the one offered to Dhritharashtra. Hence she was able to witness all the major events that happened at Kurukshetra, most of which pained her a lot. When the war ended, she was relieved and was preparing for a peaceful life in which she would take care of her sons who had not yet received the proper love of a mother. But, that very night, her sons and brothers were taken away from her by Death. She rued her role in the upbringing of this war, she repented her vengeance which resulted in the deaths of her loved ones, she regretted this war in which all the people she cared for took part. She even repented the death of her husbands eldest brother, Karna, and she was surprised to know that he had also loved her in return, secretly.

When Hastinapur was filled with widows and fatherless children, the kingdom was in turmoil. Panchaali, with the help of the other women in the household set up a women’s court, in which they did all they could in order to help the women who were widowed by the war. She helped reduce the harassment of women, and bring back the prosperity of Hastinapur by encouraging even the women in starting small businesses.

The most saddest part I found in this book is the chapter which covers Krishna’s death and the deluge of Dwarka. The numbness Krishnaa felt when she realised Krishna wouldn’t be there for her anymore was a state of desolation.

With Krishna’s death, the Pandavas decided that it was time for them to leave this world too. As they climbed the Himalayas, on the Mahaprasthan, the road to heaven, Draupadi was the first to fall. The reason Yudhishtir told was that, though she married all five of them, she truly loved only one person.

The thing I love in this book, is that though it is the life story of Draupadi, it also includes the various smaller stories and events that make up the actual Mahabharata. These are included as stories which Draupadi hear, or dreams she sees. Hence, this novel can also be considered as a book which tells the story of Mahabharata. Not all are included though. The writing is simple and can be understood easily. I even noticed that few of the values from the Bhagavd Gita were also mentioned in many conversations between Krishna and Draupadi.

There are so many types of feelings in the story that make it an excellent read: the longing for love by Draupadi, the rivalry between Draupadi and Kunti as well as with the other wives of the Pandavas, the special kind of love she feels towards Krishna, the affection Krishna showers upon all those who are in the path of Dharma or righteousness, the envy of the Kauravas, their trickery, the shame and insults upon Draupadi, the monster of vengeance growing inside her, the obedience of the Pandavas, the critical and easily-angered behaviour of the fiery Panchaali, Dhrishtadyumna’s brotherly love, their lovely childhood together, her anxiety when she had to become a common wife, her secret feelings towards Karna (but never showing it), the hidden truths behind many of Krishna’s words, the love the Pandavas felt for him, the anger and smoldering hate the commoners and the widowed felt when they saw her after the war, the guilt she felt then, the sorrow of the death of loved ones, the horror a mother feels when a son is lost, the disbelief a wife feels when her husbands do not protect her when most needed, the various rules men live by, and the extreme guilt a woman feels when she had caused such a destructive war.

The consolations by Krishna, Draupadi’s faithfulness and support for her husbands, the way she saw each of them. One of them loved her truly, but she never loved him back. She realized that she should have been a better, sweet and tender wife to her husbands, instead of striking them with serpent of seeking revenge. She realises all the mistakes she made in her life, such as insulting Karna, allowing her husbands to go to Hastinapur to play dice with their enemy, her curse on them that inflicted the war and so on. She was so desperate to change the course of history, that she really did, but killing millions at the same time. Her husbands were forced to commit fratricide to avenge her insult and their deceit. The queen of the most magical of palaces had to be a servant to another queen. The most terrible loss to her was her beautiful palace, which crumbled down due to their owners’ ill luck and deceit. Such is the nature of Mahabharata, where people performed acts of both bravery and trickery.

Hence I suggest this book if you want to read a very personal retelling of the epic by the lead female character, in which many parts are very much heart-touching and exciting to read. Written in simple language, not exaggerated, a short and impressive retelling of our traditional epic.

7 thoughts on “The Palace of Illusions by Chitra Banerjee Divakaruni: Book Review”