✨SITA✨
Navaratri 2022
‘Nava Shaktis’ Painting Series
Day: 2
Devi: Sita from Ramayana
.
Devi Sita, also known as ‘Bhūmi Putri’ (Daughter of the Earth) is the avatar of Goddess Lakshmi in the Treta Yuga as the consort of Lord Vishnu’s avatar, Lord Rama, and is the female protagonist of the Hindu epic Ramayana. She is brought up as the adopted daughter of King Janaka of Videha and marries Lord Rama who wins Her hand in Her swayamvaram. She accompanies him to the forest during Rama’s exile from Ayodhya, is abducted by Ravana, King of Lanka to his kingdom. Rama then wages war with Ravana to rescue Sita from his captivity. But once he wins the war by killing Ravana, Rama asks Sita to undergo the Agni Pariksha to prove her purity.

I have painted the scene of Sita’s Agni Pariksha at Lanka after Rama won the war and killed Ravana. Sita’s life is a representation of what women have to go through in a patriarchal and prejudistic society. Devi Sita, in this series, is a symbol of strength and purity. In this painting, I’ve tried to depict how the flames refuse to touch Sita, due to her purity and how She enters the fire confidently with a smile on her calm face. Agni Deva, the God of Fire, returns Sita to Rama, telling that his flames cannot bear to even touch such a pure soul. 🙏🏻 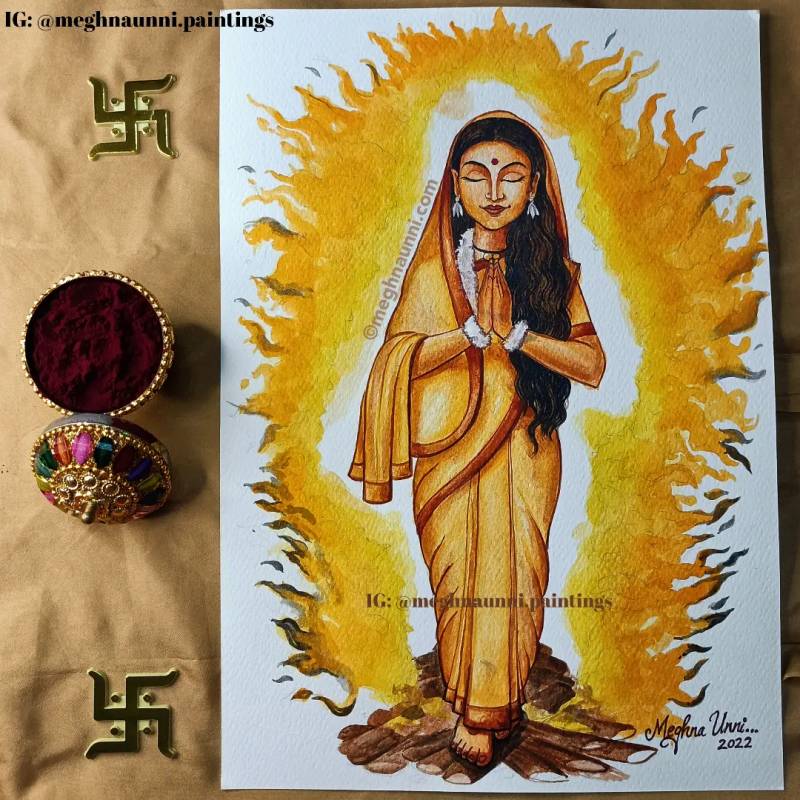