Kali is the ultimate Goddess of power, destruction and change in Shaktism. She is also referred to as Mahakali or Bhadrakali. Kali is most often characterized as black or blue, partially or completely naked, with a long lolling tongue, wearing a tiger skin skirt, a girdle of human arms, a necklace of skulls, with multiple arms holding a sword or sickle, a decapitated head and the Trisula.

As per the popular legend from Devi Mahatmyam, Asuras Chanda and Munda attack Chamundi Devi. Devi is angered so much that Her face darkens, resulting in Kali appearing out of her forehead. She immediately defeats the two demons. Later in the same battle, the demon Raktabīja is left undefeated because of his ability to reproduce clones of himself from every drop of his blood that reaches the ground. Countless Raktabīja clones appear on the battlefield. Kali eventually defeats him by sucking his blood before it can reach the ground, and devouring the numerous clones, thus announcing the victory of the good over the evil.
.
Devi Kali in this series represents the most ferocious form of the Goddess. She is also seen as the divine protector and the one who bestows moksha, or liberation.
.
Done using Acrylic paint on Watercolor sheet ❤️ 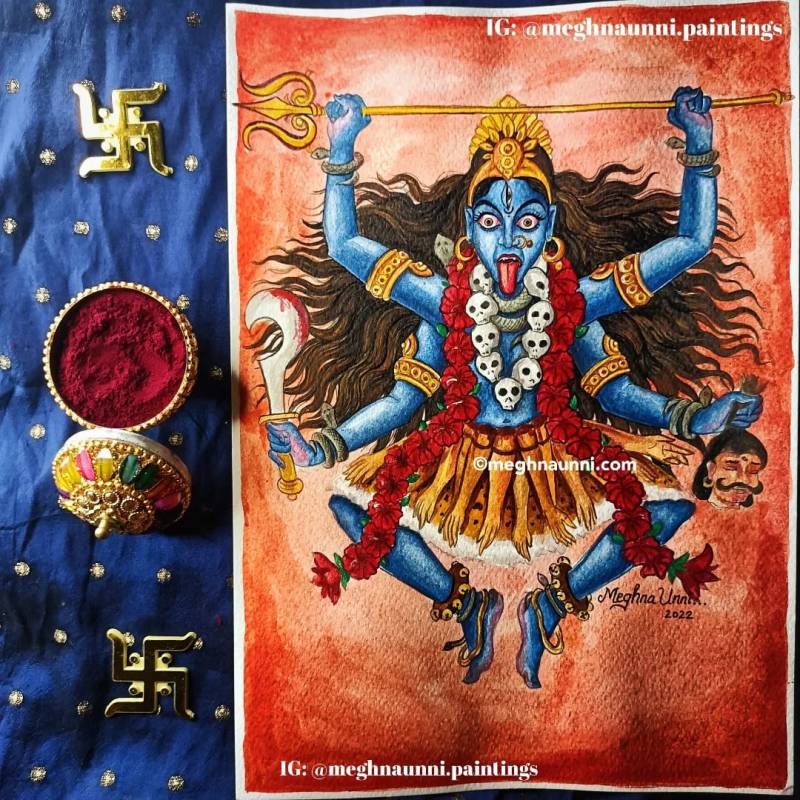