Good Morning to one and all present here. Every month, we look upon a personality who inspires us with amazing skills and talents. This month, I would like to talk about an Indian Child Prodigy, fondly called ‘The Young Human Calculator’. 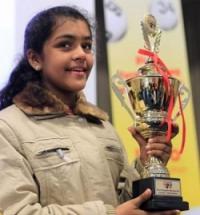 Priyanshi Somani is an Indian girl, born 16 November 1998, with the highest ever record of mental calculation. She could find the square roots of 6 digit numbers in just 6 mins 51 secs. She was named the Indian Ambassador for the World Math Day in 2011.

Priyanshi’s name holds a place in the  Mind & Memory page of Guinness Book of World Records 2014 and Limca Book of World Records. She won the Pogo Amazing Kids Award of 2010. Priyanshi once said, ” When a Math problem is in front of you, many processes go on in your mind – from seeing the problem, the brain analyzing it and trying to solve it in the most possible way and finally putting it on the paper. Making a new record should be your target every time.” Thank You.

Personality of the Month – November 2019 – 2 – A Speech about Priyanshi Somani
Tagged on: Children Speech