Duryodhana is the main antagonist in the epic Mahabharata. He was one of the bravest warriors of his generation. 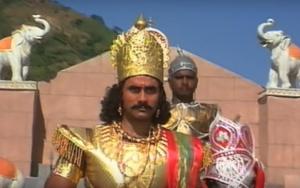 Duryodhana was known for his deep jealousy towards his cousins, the Pandavas. He had a special extra hatred towards Bhima. Bhima was more powerful and stronger than all of his brothers and cousins. He loved to bully Duryodhana and his 100 brothers.

Duryodhana’s maternal uncle Shakuni injected more poison into his already jealous mind. He plotted evil plans and made Duryodhana his pawn to execute all of them. He made Duryodhana poison Bhima, but Bhima emerged more stronger than before.

In the martial exhibition of the princes of Hastinapur, Karna challenged Arjuna. While no one supported him because of his caste, Duryodhana was the one who befriended him. He made him the King of Anga, thus making him equal to Arjuna. Karna stayed loyal to Duryodhana for the rest of his life, despite his evil deeds. But Duryodhana considered Karna his soulmate, and was so fond of him, that he was the only one who supported him whenever Karna was humiliated.

Duryodhana was enraged at Yudhishtira being made the Yuvaraja, or the Crown Prince. He along with Shakuni made a plan to kill all the Pandavas. He made his father send the Pandavas and Kunti into the wax palace. Shakuni had it burn, and it was believed for a long time that the Pandavas along with their mother Kunti had burnt to death in that fire. Duryodhana was at peace for a few years, until the Pandavas revealed their identity and returned with a marriage alliance with the powerful Panchala kingdom.

Even after the kingdom was divided, Duryodhana was not satisfied. He always regretted that half of his kingdom went to the Pandavas. He became even more jealous when he got to see the Pandavas’ majestic magical palace, at Yudhishtira’s Rajasuya Yagna. He was insulted when he accidentally fell into a pond, and was called, “A blind son of a blind man.” He vowed to take revenge on the Pandavas.

He started plotting again with his uncle Shakuni, and played the dice game with his cousins. He egged on Yudhishtira to keep on gambling away all his wealth, kingdoms, weapons, brothers and even his wife. He ordered his brother Dusshasana to drag Draupadi by her hair and even disrobe her. He slapped his thigh and gestured Draupadi to sit on it. All these one-day events gained a lot of hate for Duryodhana from the people on the Pandavas’ side. Bhima vowed to break Duryodhana’s thigh for insulting Draupadi.

Due to Duryodhana’s taunts, Yudhishtira was compelled to play another game of dice, and they lost, forcing them to go into exile for 13 years.

Having sent the Pandavas and Draupadi into the forest, Duryodhana was still not satisfied. He sent Sage Durvasa to their hut to humiliate them. He put up a tent near their hut, and showed off his rich jewels, food and luxury, enraging Bhima. When Arjuna and Bhima saved him from the clutches of the Gandharvas, he couldn’t hold back his humiliation. He couldn’t bear being indebted to his enemies. Duryodhana tried his level best to find them out during their incognito year, but failed miserably.

But as Bhima spent his 13 years in exile, Duryodhana did not entirely waste his time. He knew that after the Pandavas would return, an inevitable war would approach. He practised mace-fight day and night for his fight with Bhima. He even made a statue of Bhima for him to practise on. Over the years, he became a real expert in Gadha yudh, even more proficient than Bhima.

Duryodhana often misbehaved with his elders, and took advantage of his father’s love for him. He always believed that everyone favoured the Pandavas only because they were divine sons. He always complained to his elders about their partiality towards them. 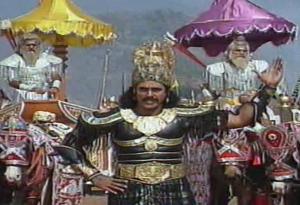 In the war, Duryodhana managed to arrange for a larger army than the Pandavas’. His army had 11 Akshauhinis, while the Pandavas had only 7. Duryodhana was always on the belief that he could easily vanquish the enemy army because all the great and experienced warriors such as Bhishma, Drona, Kripa, Ashwatthama, Karna, Shalya, and many others were on his side. As for the Pandavas, he thought Karna was enough for Arjuna and the others. Duryodhana thought he himself was more than enough to defeat Bhima. As for the rest of the Pandava army, he thought the rest of the warriors on his side should be enough. And the best advantage for him was that Krishna would not even use a single weapon in this war.

When Bhishma and Drona showed reluctance in killing the Pandavas, he openly criticized them of partiality. When Abhimanyu entered the Chakravyuha, he was the one who ordered all the maharathis to kill him.

Duryodhana called the Pandavas and Krishna cowards because they used unfair means to kill each and every great warrior on his side. He was devastated by his friend Karna’s death. When he came to know that he was Kunti’s son, it only made him more depressed. The next day, he decided to rest inside a pond. When the Pandavas taunted him, he told that he would willingly give Hastinapur to them and retire to the forest, because now he didn’t want Hastinapur anymore. But Yudhishtira invited him to challenge anyone amongst them, and Duryodhana chooses Bhima, telling that only he is atleast a bit worthy enough to fight him.

A fierce battle of Gadha Yudh was fought between between Bhima and Duryodhana. Bhima had more strength and power than Duryodhana, but Duryodhana was the expert and used many tactics and proved to be better than Bhima. As the fight seemed disadvantagious for Bhima, Krishna gestured Bhima to hit Duryodhana on his thigh, reminding him of his vow during the dice game.

Bhima struck Duryodhana on his thigh, and mortally wounded him. Duryodhana hurled abuses at Bhima telling that he attacked him using unfair means, since it was considered illegal to strike below the navel during Gadha Yudha.

Later as the Pandavas were celebrating their victory in the Kaurava tent, a dying Duryodhana ordered Ashwatthama to kill all the Pandavas and bring him their blood for proof. Ashwatthama did so, but he had killed all the 5 sons of the Pandavas, mistaking them to be the real Pandavas. But Duryodhana died before Ashwatthama returned.

And that is how the infamous Duryodhana paid for the sins he committed throughout his life. But in Heaven, he was seen enjoying all luxuries, which pained Yudhishtira. It seems though he had committed a fair few evil deeds, he was mostly on the side of Dharma throughout the battle, and hence got a place in heaven.