1. Sahadeva knew everything that would happen in the future, including Lakshagriha, the Dice Game, Draupadi’s Disrobing and also the War, in the epic Mahabharata. 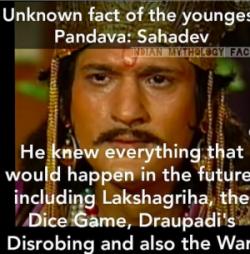 Before their father Pandu died, he told his sons to eat his flesh so as to gain all his knowledge. But his sons could not do that to their own father. But young Sahadeva saw ants taking away a piece of his father’s flesh. He took that piece and ate it. From that moment, he could divinely foresee everything that would happen in the future.

As he was about to go and tell everything to Kunti, a stranger arrived in front of him. It was Krishna. He asked Sahadeva if he wanted God to be his friend. Sahadeva nodded. Krishna said, “Then you must stay quiet. You should not tell anything about the future to anyone. You must always reply to a question with a question.”

Hence, Sahadeva was forced to be silent and witness all the dark events of Mahabharata, even though he knew everything that would happen long before itself.

In the Ramayana, only Rama is said to be the one who was able to even lift the Shiva Dhanush. But few folklore retellings tell that even Sita was able to lift the bow!

Once when young Sita was playing with a ball with her sisters, the ball 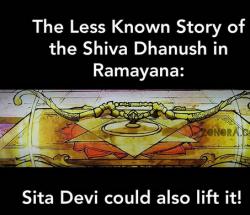 rolled and got stuck under the table in which the heavy Shiva Dhanush was kept. To get the ball, the table had to be moved. But to move the table, the bow had to be moved. So Sita attempted to lift the bow to get her ball, and to everyone’s shock and surprise, she lifted the heavy bow of Shiva with utmost ease. Seeing this incident, King Janaka had decided that the man who would be able to lift the bow will get Sita’s hand in marriage.

3. Vidhura was an incarnation of Lord Dharmaraja!

human for an entire lifetime. Dharmaraja was born as Vidhura, the prime minister of Hastinapur. He had a close relation with Yudhishtira, as he himself was the son of Dharmaraja. Only both of them could understand each others’ words fully, and were few of the most intelligent people of their generations.