Here is The beautiful yet not so popular story of Goddess Meenakshi, the principal deity of the ancient Madurai Meenakshi Sundareshwarar Temple. 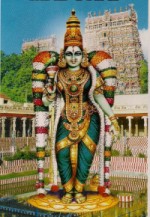 Goddess Meenakshi is an avatar of Goddess Parvati Devi. She was born as the daughter of King Malayadwaja Pandya and his wife Kanchanamalai. This story is found in the Tamil text Tiruvilaiyatarpuranam. They were performing the Yagna to beget a son. But a beautiful daughter rose from the fire. She was 3 years old when she rose from the fire and to everybody’s shock was born with three breasts. 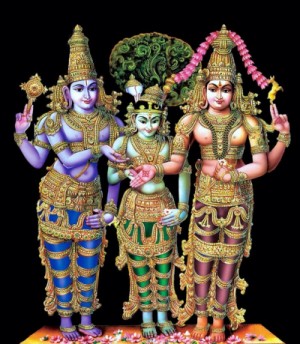 But a Divine voice spoke at that moment and announced that Meenakshi will loose her third breast when she meets the one who is destined to marry her. The King and the Queen raised her like a son and she learnt all the 64 arts (Chatushashti Kala). She defeated many powerful kingdoms through warfare and was crowned the successor of Malayadwaja Pandya.

On one of her many adventures, She meets Lord Shiva in his Sundareshwarar form. Her third breast disappears and she takes the form of Meenakshi, the one who is destined to marry Lord Shiva. She was married with great pomp and splendor to Lord Sundareshwarar. Vishnu who is considered as the brother of Meenakshi, gives her away to Lord Shiva during the marriage ceremony.