He also goes by the name Krōda Narasimha.

‘Nava Narasimhas of Ahobilam as a painting series.’

Varāha Narasimha, or Krōda Narasimha is a very special form of Lord Narasimha found at Ahobilam. He has the head of a varāha or a boar, the body of a human and the tail of a lion. There is an interesting story to the origin of this deity.

After killing Hiranyakashipu, Lord Narasimha was very angry with Lord Brahma, because he was the one who gave the boon to Hiranyakashipu. When summoned by Lord Narasimha, Brahma dropped the Vedas from his hands out of fear. When they fell down, Bhumi Devi held them and took them with Her to Patala Loka to protect them. Due to the absence of the Vedas, the Devas approached Lord Narasimha, who took the form of Varāha or Krōda and went to Patala Loka to retrieve them. He then emerged carrying Bhūmi Devi on His horn. He is seen in a standing posture with thribhangi, with only two arms.

After His anger had subsided, Brahma begged for forgiveness and requested the Vedas. Lord Narasimha rejected his request and said that He’d give the Vedas only to someone who was responsible. Lord Brahma suggested Goddess Lakshmi, and Narasimha Swamy accepted. Lakshmi Devi was given the Vedas and the Lord took the form of Lakshmi Narasimha to give darshan to Lord Brahma and then blessed him. Thus, there is also an image of Lakshmi Narasimha found in this shrine. 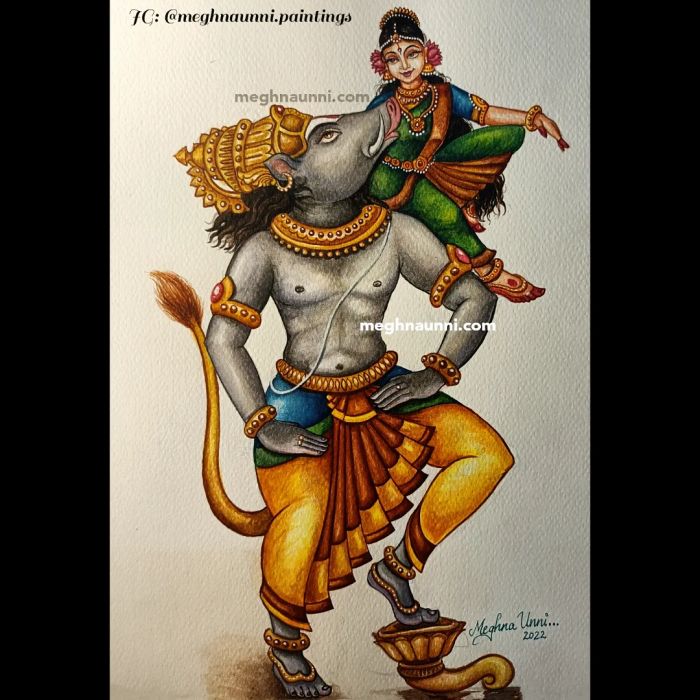