Dessin Academy Painting Competition 2012 was held at Lalit Kala Academy, Greams Road, Chennai on February 11, 2012. The topic was given on the spot. Meghna participated in the Group B : Classes II to V category. The topics for the group were “Vegetables playing games”, “Inside the fish tank”, and “Vehicles in 2030”.

Meghna with her drawing

Meghna selected the topic ” Inside the Fish tank” and drew the following picture. Meghna won the First Prize in the category B in the Dessin Academy Painting Competition.

Meghna working on the picture 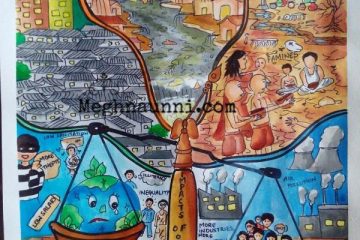 Effects of Over Population Painting

A painting done on the topic “Effects of Over Population” for a competition back in 2018. Medium : Acrylic Over population destroys our environment, because of more usage of resources on Earth, pollution, famines etc. 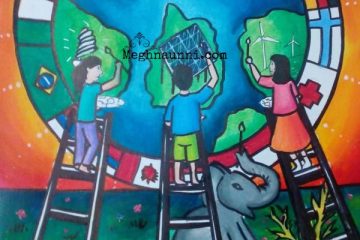 Together We Are Eco-Friendly Painting

Painting done for Kao International Painting Competition 2017 for the topic “Together We Are Eco-Friendly”. Medium : Acrylic on Paper The topic aimed at showing equality of all living things on earth and existing together Read more… 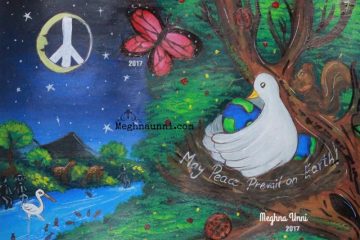 May Peace Prevail on Earth Painting from 2017

This is an unpublished picture I did back in 2017 for the May Peace Prevail on Earth International Painting Competition 2017. Found it in old folders on the computer now. Medium : Acrylic on Paper Read more…