Many books and serials end the story of the Mahabharata with Yudhishtira’s coronation at Hastinapur. But this vast epic does not just end on that happy note. It has lots of tragedies even after that.

After the great Kurukshetra war, Lord Krishna returned to Dwarka. Gandhari had cursed Krishna that his family too would be destroyed like how hers had been destroyed. There will be no one left to continue his line. Krishna knew everything that was going to happen.

The Disasters at Dwarka:

Samba, the son of Krishna and Jambavati, decided to play a prank on some rishis who had come to meet Krishna. All these events happened 36 years after the war. He dressed up a pregnant woman, and asked the rishis to predict the gender of the baby. The rishis saw through the prank, and cursed Samba that he would deliver an iron mace, which would cause the end of their Yadu Dynasty. The next day, Samba did deliver an iron mace. King Ugrasen ordered the youth to grind the mace into fine powder and throw it into the sea. They did as they were told. But one sharp piece was so hard that they were not able to grind it.

This piece was swallowed by a fish. This fish was caught by a hunter named Jara, who used that sharp iron piece to make an arrowhead for his arrow. The rest of the powder of the mace got washed up on the shores of Dwarka, and grew as eraka grass.

A few days later, a fight broke out between the Yadavas who were drunk. Very soon, the fight became a war amongst themselves. Almost everyone died, except the women. Krishna knew that this was the day of doom for the Yaduvanshis. Dwarka would soon be deluged. He sent a messenger to Arjuna at Hastinapur to take all the women of Dwarka for shelter at Hastinapur.

He saw his brother Balarama doing meditation, and leaving his body. Seeing that, Krishna decided it was time for him to leave too.

He sat down under a tree, to take rest. The hunter Jara mistook his foot to be the face of a deer, and shot an arrow (which had the arrowhead he got from the fish) at it. When he saw what he had shot at, he was devastated. Krishna forgave him, and left his body. Vishnu returned to Vaikuntha.

Some legends say that in his previous birth, Jara was Bali, who was killed unjustly by Shri Rama. Rama promised him that he would also get such a chance to kill him in their next births.

Once news spread that Krishna was dead, Dwarka was in turmoil. All the women started screaming and weeping. No men were left. They had fought and killed their own people.

Arjuna arrived from Hastinapur. He was devastated at Krishna’s departure, and performed his final rites. Then he prepared to take all the women safely to Hastinapur.

But on their way, they were attacked by bandits and dacoits. Arjuna, the greatest archer, who had fought valiantly in the Kurukshetra War, was unable to fight the attackers. Most of the women jumped into a nearby pond to escape their clutches, and the bandits kidnapped the rest of them. Arjuna couldn’t do anything to save them. He realised that with the departure of Krishna, he had lost all his powers and skills.

He understood that it was because of Krishna’s grace and blessing that he was able to be such a great warrior and archer. Without Krishna he was nothing.

Arjuna returned to Hastinapur and informed his brothers and wives about Dwarka and Krishna. Everyone were depressed. Yudhishtira decided that if Krishna had left this world, then they should make a move too.

Hence the five brothers along with their wife Draupadi went on a pilgrimage. They first travelled south till they reached the sea.

Surya Deva, the Sun God emerged from the sea and asked Arjuna to return his Gandiva and other celestial and divine weapons to him. Those weapons were brought to earth only for the upholding of Dharma by Arjuna, and now their jobs were over. Arjuna, after persuasion from his brothers, threw all his weapons into the sea.

Then they travelled west and reached the ruins at Dwarka. The beautiful city of Krishna was now underwater. Then they proceeded towards the Himalayas in the north.

There, they reached a path which led to the heavens. The journey on this path is called ‘Mahaprasthan’.

The five brothers and their wife started climbing the rocky and icy path which led to the heaven. A few rishis had informed them that on the journey of Mahaprasthan, one should never retrace his or her steps. If one managed to make his way alive to the end of the path, he would be able to enter heaven with his mortal body.

A dog accompanied them at the start of the journey.

Draupadi was the first to die. She collapsed and fell, unable to bear the cold and rocky path. Yudhishtira urged his brothers to leave her, since if one retraces his steps, then he himself will die. Bhima sadly asked what wrong did she do to die so early. 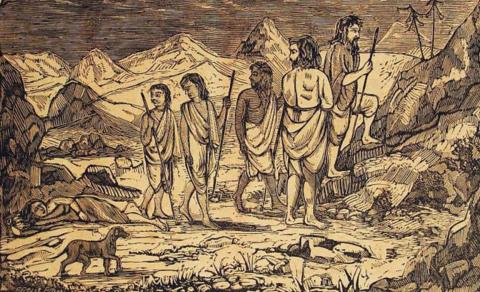 Yudhishtira replied, “She claimed to have loved all of us equally. But in her heart, her love and affection were all towards Arjuna. She loved him more than all of us. That was her fault.”

The five brothers proceeded on the path.

Sahadeva was the next to fall. Yudhishtira said, “He was too proud of himself, thinking that no one could match him in wisdom and intelligence. That was his fault.”

Nakula collapsed next. When asked the reason, Yudhishtira said, “He too was proud of himself. He thought he was the most handsome man in the world, and no one was greater than him in beauty. That was his fault.”

Arjuna also collapsed and fell dead after Nakula. Bhima again asked Yudhishtira what was Arjuna’s fault. Yudhishtira said, “Like his younger brothers, he was also too proud of his skills. Even though he was one of the greatest archers of all time, he was very arrogant and often boasted about his powers. That does not make one worthy to enter heaven without death.”

Bhima fell next. As Yudhishtira prepared tp proceed, Bhima asked him what was his fault. Yudhishtira replied, “You too, like Arjuna were very powerful and strong. But you were also possessed by arrogance. You gloated when someone suffered. That was your fault.”

The dog which had accompanied them was still walking along with Yudhishtira. Now only they both were left. As Yudhishtira climbed, he reached the end of the path.

Lord Indra was waiting for him there with his divine chariot. Yudhishtira sought his blessings. He said, “Yudhishtira, you have proved yourself capable of entering heaven without death. Enter this chariot, and I will take you to heaven direclty from here.”

Yudhishtira smiled, and prepared to step onto the chariot along with the dog. Indra stopped him.

“What are you doing Yudhishtira? Surely you must be knowing that dogs do not have a place in heaven. You will have to leave that dog here itself.”

Yudhishtira frowned. “My Lord, this dog has accompanied me right from the start of this difficult journey. It has climbed the same rocks as I have. It has suffered the same cold as I have. Then why shouldn’t it not have the right to enter heaven as I have? I am sorry my Lord, but if this dog isn’t allowed to enter heaven, then I might as well not do so.”

Indra was surprised. “Yudhishtira, are you sacrificing your priceless entry into heaven for the sake of this dog?”

Yudhishtira seemed adamant. The dog beside him smiled and transformed into Lord Dharmaraja. Yudhishtira was shocked. He fell to his knees and saluted him. Dharamaraj and Indra both smiled at him. Dharmaraj said, “My dear son, Yudhishtira, you have proved yet once again that you are the most honest and the one who follows Dharma for his life. I am pleased with your truthfulness and simplicity. You have gained direct entry into heaven without death.”

That was the final test of Yudhishtira, and he aced it with his simplicity and honesty.

One thought on “How Did the Mahabharata actually end? | Indian Mythology Facts – 3”