Skip to content
After Navaratri series, here is a weird series of ‘Vote of Thanks’ coming up: Please bear with me for the long post.
A HUGE thank you to the Goddess Herself, for blessing me enough to be able to do this. I had decided on painting Ashta Māthrikas for this year’s Navaratri a long time back, but the idea of painting them in different dance poses in dance costumes came to me while I was reciting the Lalithasahasranamam one fine evening a few months back. It was as though SHE was sending me a message! And after deciding all this, when September came with all its exams, schoolwork, toothache, I somewhat gave up the idea of doing a Navaratri series at all: there was no time. But then again, one evening, after I finished reciting the Lalithasahasranamam, I got way too motivated to do the series fully, no matter what. I really don’t know how that happened, but it’s obvious: SHE wanted me to do it.
And so it began: research on the iconography of all the Māthrikas, deciding dance poses for each of them, allocating costume colours, and deciding which medium and sheet to use. It was so exciting to create original artworks: this was something I’ve been wanting to do for a loooooooong time. The overwhelming response I received on my Instagram for this painting series is another factor which motivated me to continue painting till the end. So happy that many people really liked them and I hope SHE liked it too.

Māthrikas are a group of Mother Goddesses. But my own Mother Goddess also played a huge role in this series: my mom, Manju M Nair is the one who found out about this group of Devis and suggested that I paint them for Navaratri. She helped me select the costume colours, helped me decide if the pose was looking good, made me snacks for refreshment, took me out to watch my favourite people dance on stage despite not finishing the painting, and ultimately, even allowed me to paint during my 12th std Board Exam year. Thank you mom, for letting me do what I love to do the most.

(Okay, I’ll go and study after this!

)
Special mention to my dad, who edited all the videos I took and posted them on YouTube. He and mom helped me catch up on all the comments on YouTube, Facebook, Whatsapp and Instagram. He also motivated me to continue painting till the last one and regularly came to check on how far I had progressed (often sarcastically mentioning that I was painting for this year’s and not next year’s Navaratri.)

A BIG Thank you to all my dear Akkas, Annas, Friends, Aunties and Uncles for sharing my artworks and letting me know that you all liked it

such compliments really mean a lot to me

Special mention to all those who asked me both in person and through messages, whether I “finished painting today’s Devi or not”

Especially my dance class friends and Akkas, you guys really made me nervous, but thanks for asking

if I go on to mention everybody, this vote of thanks would never end, so please forgive me for that.
Special mention to Harinie Jeevitha akka and Kameshweri akka, who helped me correctly decipher the lines from the song in Janani Jagath Karani Dance Drama, on which this series is based on. And Harinie akka also cleared some of my weird doubts regarding the iconography of different Devis. Thank you Akkas

Thank you to the little guys, my ring light and my phone stand, for helping me document the whole painting process for putting it up on my Youtube channel. The last week has been hard for them too, sitting continuously for hours along with me, so giving them a break as well.

Thanks to my table, where I had sat at and painted all the Devis. It had been littered only with paint bottles, tubes, brushes and palletes for the last one week. From today it will be filled with school books and pens (hopefully).
Thanks to YouTube, for playing all my favourite songs from Kuldeep Sir’s, Sridevi Nrithyalaya’s and Sooryagayathri’s channels while I painted. For me, painting or drawing without listening to songs is like reading a book without words in the pages.
And thanks to my own body for enduring all the sleeplessness, backaches, headaches and toothaches during this period. I didn’t sleep for two nights at a stretch during this week and I still have exams coming up (maybe I should sign a petition to include more than 24 hours in a day).
Well that’s it, I guess. Oru typical SDN Arangetram vote of thanks mudinja maadhri irukku 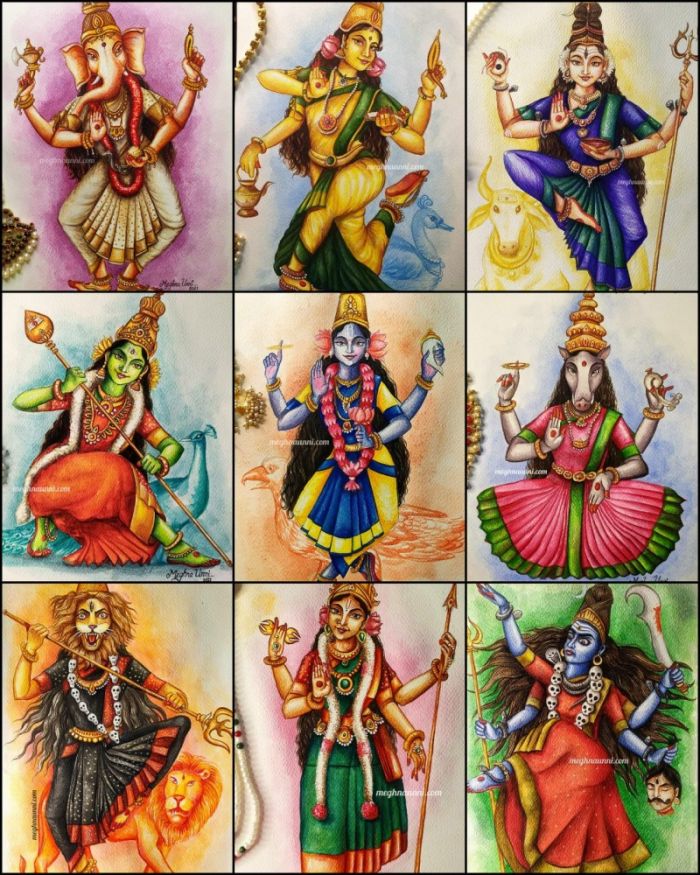 Vote of Thanks after Navaratri Series 2021

2 thoughts on “Vote of Thanks after Navaratri Series 2021”