May Shri who rose from the Ocean of Milk, bless us all this Diwali with success, prosperity and joy!
.

-Annamacharya
.
Neeraajanam (aarati, benediction) to the daughter of the milky ocean, to the Goddess Shree Mahaalakshmi, and to the one whose abode is a lotus.
.
Happy Diwali!

Instead of the usual Lakshmi pose seen everywhere, I tried a different one here. According to some legends, Lakshmi Poojai is done on Diwali to celebrate the day when Lakshmi Devi rose from the Ocean of Milk as Shri, when the Devas and Asuras where churning it together. Since She miraculously appeared from the Sea of Milk, She is also called ‘KshirAbdhi tanayA’ or ‘KshirAbdhi kanya’ which means ‘daughter of the sea of milk’.
In fact, the idea for this artwork was inspired by this excerpt from an Amar Chitra Katha comic (you could say I grew up reading them):

Shri arose from the Ocean, graceful and effulgent. Her beauty was such as to stir the minds of the Devas and Asuras. All of them were anxious to be of service to Her. Ganga and other holy rivers brought water in golden jars for Her ablutions. Vasanta, the God of Spring, brought Her fruits and flowers. The Apsaras began to dance for Her. The clouds rained music from a variety of instruments. Varuna, Lord of the Waters, brought Her the celebrated Vaijayanti garland. When the auspicious ceremonies were completed, Shri moved here and there looking for the one who is the repository of all good qualities. In the end, She chose Lord Vishnu, who is perfect in every way. She placed the beautiful Vaijayanti garland round His neck. Vishnu, Lord of the Three Worlds, accepted Her.

Such a beautiful story! So I drew Shri holding the Vaijayanti garland, shyly looking at Her beloved, Lord Vishnu. She is said to have risen from the Ocean standing on a lotus, so that’s why I drew Her on a lotus. 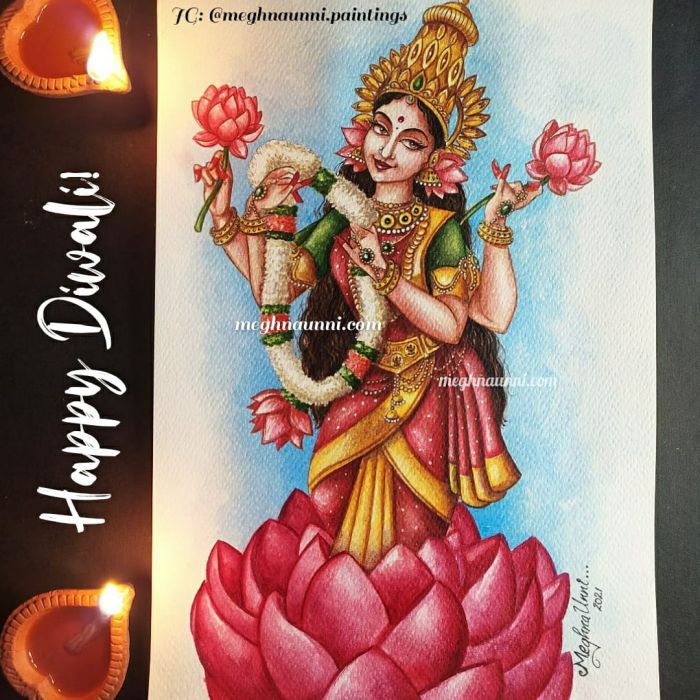